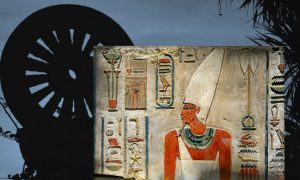 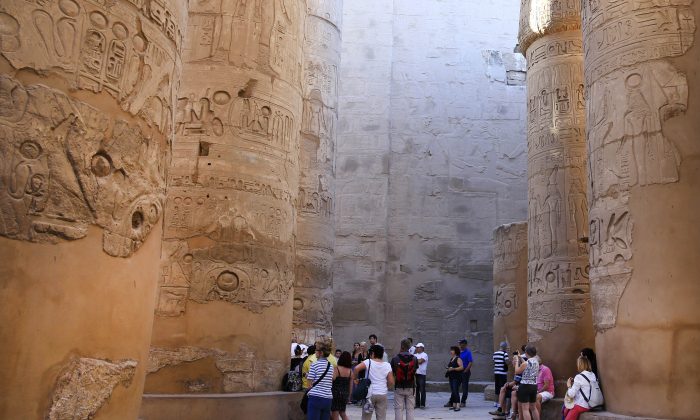 FILE - In this Sunday, Nov. 30, 2014, file photo, tourists point out the hieroglyphic on columns in the Hypostyle Hall at the Karnak Temple in Luxor, Egypt. (AP Photo/Hassan Ammar, File)
Middle East

LUXOR, Egypt — A suicide bomber blew himself up Wednesday close to the ancient pharaonic temple of Karnak in southern Egypt, a site visited by millions every year, the government said. No tourists were hurt and the Nile-side monument was not damaged.

The attack was the second this month near a major tourist attraction in Egypt, marking a shift in tactics in a campaign of violence waged by Islamic militants against the government of President Abdel-Fattah el-Sissi. The attacks suggest extremists are shifting from shootings and bombings of security forces to targeting Egypt’s vital tourism industry.

The industry is only just beginning to recover from the turmoil in the country since 2011. On June 3, gunmen on a motorcycle opened fire outside the famed Giza Pyramids on the outskirts of Cairo, killing two police officers.

In Wednesday’s violence, officials said security at Karnak prevented the suicide bomber from entering the temple complex, and the forces battled two gunmen who were with him, killing one and capturing the other.

Karnak is one of Egypt’s biggest tourist draws, a complex of temples, colossal statues, obelisks and massive columns built by a succession of pharaonic dynasties. The oldest sections date back nearly 4,000 years.

Mohammed Sayed Badr, the governor of Luxor province, told The Associated Press that the attack was “an attempt to break into the temple of Karnak.”

Badr said the suspicions of police were raised when they saw three men carrying bags get out of a car in a parking lot. One began running when police ordered them to stop, so the police fired at him and an explosive belt he was wearing blew up. The Tourism Ministry said in a statement that the man detonated his “explosive device,” killing himself instantly.

A second man had a gun and opened fire at police before he was shot and killed. The third attacker was wounded in the shootout and arrested, Badr said.

The exchange of fire wounded four people, including two policemen and a staffer at the site, according to the Interior Ministry, which is in charge of police.

Badr said the nationalities of the attackers have yet to be determined.

There were only a handful of tourists and Egyptians inside the temple at the time of the attack, security officials said, speaking on condition of anonymity because they were not authorized to talk to the media.

The blast scattered debris across the parking lot. Hundreds of onlookers and workers from a line of stores just outside the temple watched as ambulances rushed to the scene. AP video showed what were believed to be the remains of the bomber covered with a black plastic sheet with pools of blood nearby.

Tourism Minister Khaled Ramy said he expects the industry’s slow recovery to continue despite the attack. “Security forces were there. It’s a very important message to everyone,” he told the AP on a flight from Cairo to Luxor.

After meeting with the interior minister and the prime minister, el-Sissi praised the police and called for increasing security at tourist sites.

Four groups of foreign tourists visited the temple after the attack, according to Mohammed Othman, deputy director of the local association of tour operators.

There was no immediate claim of responsibility, but it bore the hallmarks of Islamic militants who have been battling security forces in the strategic Sinai Peninsula.

The Sinai violence accelerated and spread following the 2013 military overthrow of Islamist President Mohammed Morsi. The militants say the attacks are in retaliation for a massive crackdown on Islamists in Egypt.

They have largely targeted police and soldiers. But the violence at Karnak and Giza raise the prospect that the extremists are turning to the tourism industry.

In the 1990s, Islamic insurgents battling the government intentionally targeted tourism in a bid to undermine the economy. The deadliest came in Luxor in November 1997, when militants attacked tourists at the 3,400-year-old Hatshepsut Temple, killing 58.

Luxor is home to some of Egypt’s most famous ancient temples and pharaonic tombs, including that of King Tutankhamun. The city has been one the sites hit hardest by the sharp downturn in foreign visitors since Egypt’s 2011 uprising that ousted autocrat Hosni Mubarak.

Before the turmoil, tourism accounted for as much as 20 percent of Egypt’s foreign currency revenues, with as a high of 14.7 million tourists in 2010.

After the 2011 uprising, those numbers plunged to 9.6 million, and then fell somewhat lower in 2013 after Morsi’s ouster. Tourists have slowly been coming back — officials say tourism revenues jumped to $4 billion in the first half of this year, compared with $1.9 billion in the same period last year.

But the salvation for Egypt’s tourism has been beach resorts in southern Sinai and along the Red Sea coast, drawing the bulk of visitors. “Cultural tourism” sites like Luxor have seen only a trickle.

Wednesday’s attack is likely to result in canceled bookings for Luxor — though the blow is cushioned by the fact that it is now low season there. Summer temperatures above 40 degrees Celsius (104 Fahrenheit) force most tourists to stay away until October.

Three major German operators, TUI Deutschland, a German branch of Thomas Cook, and L’TUR, said they are temporarily canceling excursions to Luxor but stressed that most of their customers are at Red Sea resorts or on Nile cruises.

“We have no reason to advise against traveling to Egypt at the present time, since the German Foreign Ministry hasn’t changed its security guidance,” said L’TUR spokesman Thomas Pluennecke. “But, as a precaution, we have stopped all excursions to Luxor. Of course we take the situation seriously.”

The Association of British Travel Agents said it was consulting with its members and the Foreign Office “to assess the impact” of the attack.

About 250,000 Britons travel to Egypt each year, most visiting Sharm el Sheikh and other Red Sea resorts.