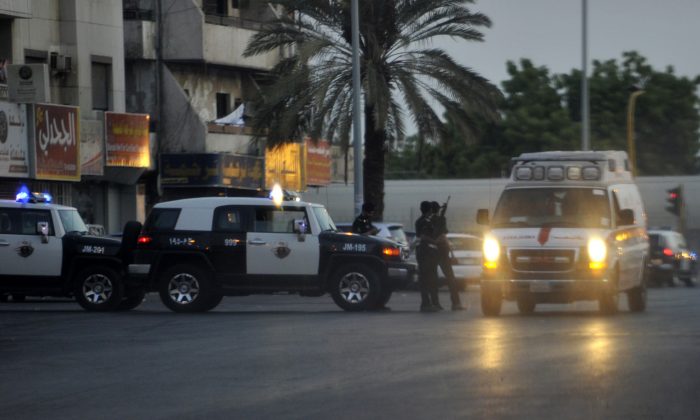 Saudi policemen stand guard at the site where a suicide bomber blew himself up in the early hours of July 4, 2016 near the American consulate in the Red Sea city of Jeddah. (STRINGER/AFP/Getty Images)
Middle East

Suicide Bomber Hits Near US Diplomatic Site in Saudi Arabia

DUBAI, United Arab Emirates—A suicide bomber carried out an attack early on Monday near a U.S. diplomatic site in the western Saudi city of Jiddah, according to the Interior Ministry.

Interior Ministry spokesman Maj. Gen. Mansour al-Turki was quoted in the statement as saying the attacker caught the attention of the security guards, who noticed he was acting suspiciously at an intersection located on the corner of the heavily fortified U.S. Consulate in Jiddah, located by the Dr. Soliman Fakeeh Hospital. Most of the consulate’s staff had reportedly moved offices to a new location.

The U.S. Embassy in Saudi Arabia confirmed there were no casualties or injuries among the consular staff. The embassy said it remains in contact with Saudi authorities as they investigate the attack.

No one immediately claimed responsibility for attack.

The Interior Ministry did not specify if it there are indications the bomber intended to target the U.S. diplomatic compound, saying an investigation was underway to determine his identity.

A 2004 al-Qaida-linked militant attack on the U.S. Consulate in Jiddah killed five locally hired consular employees and four gunmen. The three-hour battle on the compound came amid a wave of al-Qaida attacks targeting Westerners and Saudi security posts.

In June, the Interior Ministry reported 26 terror attacks had taken place in the kingdom in the last two years. Local affiliates of the IS group have targeted minority Shiites and security officials.

Monday’s attack comes just days before the end of the holy month of Ramadan, during which observant Muslims fast daily from dawn to dusk.

The U.S. Embassy regularly issues advisory messages for U.S. citizens in Saudi Arabia. In a message issued Sunday and another one issued after the attack Monday, the embassy urged Americans to “remain aware of their surroundings, and take extra precautions when travelling throughout the country.” It also advised citizens to “carefully consider the risks of traveling to Saudi Arabia.”