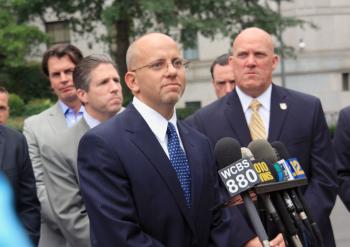 Helena Zhu
View profile
Follow
biggersmaller
Print
NEW YORK—Suffolk County’s police union officials called on the U.S. Justice Department on Sunday to investigate the county’s Conservative Party, as it put forth a “loyalty test” for hundreds of police officers that had registered with the party.

At a press conference across from the U.S. District Courthouse, the Suffolk County Patrolmen’s Benevolent Association (PBA) revealed that the party’s chairman, Ed Walsh Jr., sent out notice letters to approximately 850 registered voters—most of whom were police officers.

The letters notified the individuals that Walsh knew of reasons they were unsympathetic to the party’s principles, and that he would hold a hearing to determine if they are qualified to be enrolled in the party and if they would be allowed to vote in the upcoming state and local primary elections.

“You see a party boss trying to control the electors and disenfranchise voters—and that’s something I don’t think is right,” said Chris Cox, who is seeking the Republican and Conservative nominations for Congress in Suffolk’s First Congressional District.

“The party boss shouldn’t try to control who votes in an election—that’s not fair. What I want is a free and open process, and let’s let the people decide.”

The letter asked registered voters to come to hearings and bring along documents, e-mails, and other files related to the Conservative Party, County Executive Steve Levy, Suffolk Sheriff Vincent DeMarco, and the county’s police union.

Several police members confirmed with the police union that they received a personal visit to their home from individuals claiming to be representatives of the party. They questioned the police in their participation in the primary process, “which is extremely intimidating to anyone, in particular someone who’s newly enrolled in the party,” said Noel DiGerolamo, second vice president of the police union.

Cox, who has gone to court to protect the rights of Conservative voters in an open primary, said that such voter intimidation must be stopped to prevent similar instances from happening in the future.