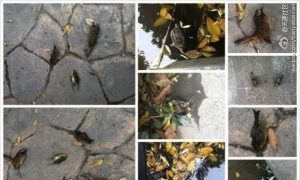 Thousands of animals have been mysteriously dying in China over the past few weeks, with 410 pigs, 122 dogs, and other domestic animals in Dongtun village, Henan Province, added to the list on Monday.

Dead dogs were reported to be piled on the sides of the streets, and residents said many of the surviving animals are ill. Numerous cats died, and even dead rats were found.

“There are more than 300 pigs on my pig farm; nearly 200 died, and the rest are dying,” said a villager called Mr. Song, according to a report by the Dahe Daily.

Local authorities are investigating the cause of the deaths, and tests have ruled out the new H7N9 bird flu virus, which has reportedly infected 77 people and killed 16 to date.

Instead, locals suspect that the deaths are due to noxious fumes from a nearby chemical plant. The plant has temporarily stopped production, although officials said air quality tests had not revealed any dangerous chemicals.

“There is always a smell, but this morning it was unbearably strong and repulsive,” a local resident told the Dahe Daily.

The plant makes pharmaceutical products, and has been in operation for over 10 years. Residents have repeatedly complained about the environmental pollution, but without results.

In the past two years, the emissions got worse and many locals have been suffering physical symptoms. “The gas makes people feel dizzy, and hurts our throats. Many people in the village died of cancer between the ages of 30 and 50” a resident said, according to the Daily.

A reporter with Henan Business Daily said he saw a dozen walnut trees next to a pig farm with darkened wilting leaves, and a lot of the local residents had swollen throats.

A security guard at the chemical plant stopped the reporter from entering. He had apparently received an order from upper management, and said, “The unreal reports by the media had damaged the factory’s credibility.”

A Weibo blogger said: “410 pigs died overnight, 122 dogs died for no reason, the birds fell down while they were flying, the hedgehogs just stopped crawling … and the factory claimed that the unreal reports damaged its reputation …”

Another joked: “The tests did not find any harmful chemicals in air samples from the village, so the animals died of being investigated for corruption?”

The carcasses are being disposed of in a remote area by burying them in a deep pit sprayed with lime.

Other recent mass animal deaths in China include 16,000 pig carcasses dumped in Shanghai’s Huangpu River, hundreds of pounds of dead fish in Shanghai and Beijing, and dead wild birds in Jiangsu, Hubei, and Sichuan provinces.