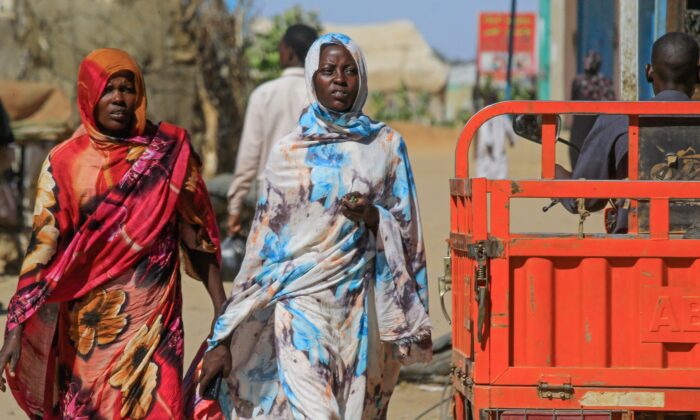 Sudanese women walk to a market in Abu Shouk camp, nearly 20 kms north of El-Fasher, the capital of the North Darfur state, on Nov. 5, 2019. (Ashraf Shazly/AFP via Getty Images)
By Katabella Roberts

Sudan’s new transitional government has officially criminalized female genital mutilation (FGM) in a landmark move for the country and a sign of its commitment toward improving the rights of women and girls following the ousting of its president, Omar al-Bashir, last year.

The sovereign council and the council of ministers in Sudan approved an amendment to Sudan’s Criminal Law Article 141 on April 22. The procedure is defined as mutilating “the female genitalia by cutting, mutilating, or modifying any natural part of it leading to the full or partial loss of its functions.”

The amendment states that anyone who performs the procedure, whether in a hospital, health center, dispensary, clinic, or elsewhere, faces three years imprisonment and a fine or closing of the premises.

FGM involves the partial or total removal of female genitalia, including the labia and the clitoris, or other injury to the female genital organs for non-medical reasons. The procedure is highly dangerous and is known to cause a number of health problems, including severe bleeding, infections of the urinary tract, uterus, and kidney, as well as reproductive issues, fatal childbirth complications, and increased risk of newborn deaths.

However, the practice is entrenched in the culture of Sudan, which has one of the highest rates in the world, and is typically carried out by traditional circumcisers who often play other central roles in communities, such as attending childbirths. FGM is often performed due to social pressure to perpetuate the practice, and beliefs about what is considered acceptable sexual behavior. For many communities in Sudan, it is believed that FGM will ensure premarital virginity and marital fidelity by reducing a woman’s libido.

While there are no religious scriptures advocating the practice, practitioners often believe it has religious support, and a number of religious leaders continue to promote it.

According to UNICEF, FGM is mostly carried out on young girls between infancy and age 15. Some 87 percent of Sudanese women between ages 14 and 49 have undergone some form of FGM, while more than 200 million girls and women alive today in 30 countries in Africa, the Middle East, and Asia, where FGM is concentrated, have been affected despite the fact that at least 24 of these countries have legislation or decrees against FGM.

However, a report published in March in partnership with the End FGM European Network and the US End FGM/C Network, found that hundreds of thousands of cases of FGM have been documented across 92 countries in Asia, the Middle East, Europe, North America, and Latin America.

FGM is recognized internationally as a violation of the human rights of girls and women and was already illegal in some Sudanese states, but these bans were widely ignored.

Previous attempts to ban the practice in Sudan were rejected by parliament under longtime dictator Omar al-Bashir, who ruled the country for nearly 30 years with an iron fist. The former leader was removed from power by the Sudanese military on April 11, 2019, following months of protests against the regime, triggered by rising prices and a failing economy.