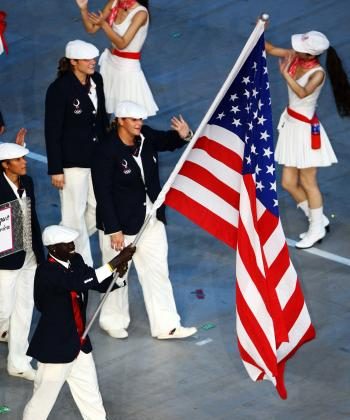 Runner Lopez Lomong of the United States carries his country's flag during the Opening Ceremony for the 2008 Beijing Summer Olympics. (Mike Hewitt/Getty Images)
US

Lomong escaped the violence in Sudan to spend 10 years in a Kenyan refugee camp. From there he was picked for adoption into an American family. The 23 year old runner was chosen to lead the U.S. contingent by the sports team captains on August 6.

Lomong’s aspirations for Olympic glory started back in Africa when he saw Michael Johnson running at the Sydney Olympics in 2000 on an old black and white television.

“I got inspired by that and that’s why I knew that I was going to make it to the Olympics one day. I didn’t know what country, but here we are,” said Lomong.

The 1500 meter runner who is competing for the first time on the international stage is also a member of Team Darfur. The advocacy organization uses Olympian and professional athletes to highlight the humanitarian problems facing the Sudanese region.

“I lived in that life before. That’s why I’m a member of Team Darfur because I was in that situation before and me coming here, I’m here to compete for my country, said Lomong.

The CEO of the United States Olympic Committee, Jim Scherr, said he was proud of Lomong’s achievement and of being a U.S. citizen.

“I think that’s a testament to his own perseverance, will and desire and his qualities as a human being. It’s also a testament to the system that allowed him to get to that place,” Scherr said.

“They have more leverage [over] the Sudanese government than any other nation. Their ties cannot be denied … And as host of the Olympics, you make solemn commitments,” said Cheek.

But the Chinese authorities’ promises of a free Olympics seem to have faded. China cancelled Cheek’s and Greimer’s travel visas.

“I’m disappointed for Joey Cheek. He’s supposed to be here. He’s an Olympian and he’s supposed to tell people about the situation that’s happened,” said Lomong.

According to Cheek, the Chinese regime does not care about the Olympic spirit but only about its image.

What rankles the Olympian the most is the infringement of free speech. “’No, not allowed to speak on anything and if you do, you are being political.’ And so what we are seeing is a systematic rollback of freedom of speech,” said Cheek.