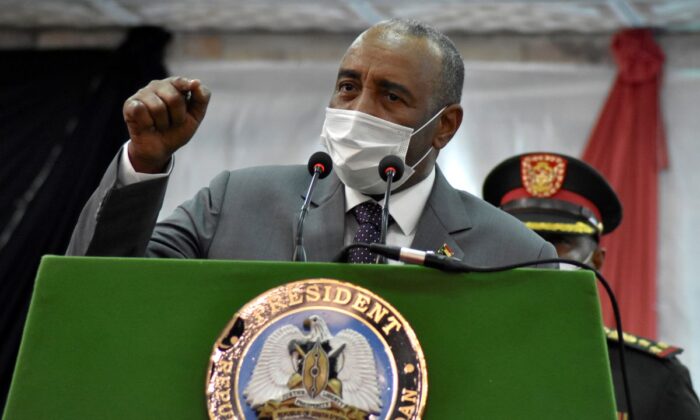 The head of Sudan’s ruling council, Gen. Abdel Fattah Abdelrahman al-Burhan, announced a countrywide state of emergency on Oct. 25 and said he was dissolving the transitional sovereign council and the government.

In a televised appearance, al-Burhan announced that he was dissolving the country’s ruling Sovereign Council, as well as the government led by Hamdok, CBS reports.

He added that a new government of technocrats would rule until elections were held in 2023. The army general said this was being done as a way of “rectifying the course of the revolution.”

The country’s information ministry said on Facebook that Hamdok had been placed under house arrest by military forces who were pressuring him to release a “pro-coup statement.” After refusing to endorse the coup, Hamdok and his wife were moved to an unknown location by the military, the ministry said.

Security forces also arrested a number of members of the Sovereignty Council, ministers, and political leaders, the ministry confirmed.

“What happened represents a tearing up of the constitutional document and a complete coup against the gains of the revolution that our people paid for with blood in search of freedom, peace, and justice,” the ministry said.

“Sudanese military leaders take full responsibility for the life and safety of Prime Minister Dr. Abdullah Hamdok and his family, these leaders also bear the criminal, legal and political consequences of their unilateral decisions.”

The arrests followed weeks of rising tensions between Sudan’s civilian and military leaders.

Sudan has been run by a transitional government of military and civilian elements since 2019 after former longtime dictator Omar al-Bashir, who ruled the country for nearly 30 years with an iron fist, was removed from power following months of protests against his regime, triggered by rising prices and a failing economy.

The transitional period is set to be followed by elections to form a new government.

Following Hamdok’s arrest, tens of thousands rallied in protest to reject the military coup. Violence quickly ensued, with military forces allegedly shooting live bullets at protestors, leaving a number of people injured, according to the ministry.

Meanwhile, doctors across the country’s hospitals declared a political strike over the military coup, barring emergencies, and withdrew from all military hospitals.

The ministry said the internet had been cut off and military forces had closed bridges.

NetBlocks, a group that tracks disruptions across the internet, said it had seen a “significant disruption” early Oct. 25 to both fixed-line and mobile internet connections across Sudan with multiple providers.

Early on Oct. 25, U.S. Special Envoy to the Horn of Africa Jeffrey Feltman said Washington was “deeply alarmed” by reports of the military takeover, The Associated Press reported.

Feltman met with the Sudanese ruling council and the prime minister over the weekend in an effort to resolve the growing dispute between the country’s civilian and military leaders, and urged them to work “together to implement the constitutional declaration and Juba Peace Agreement,” the U.S. Embassy in Khartoum wrote on Oct. 23 on Twitter.

“The EU calls on all stakeholders and regional partners to put back on track the transition process,” Borrell wrote.

Meanwhile, German Foreign Minister Heiko Maas issued a statement calling the news “dismaying” and that the coup attempt must be clearly condemned.

“I call on everyone who is responsible for security and the state order in Sudan to continue the peaceful political transition process in Sudan towards democracy and to respect the will of the people. This attempted coup must be stopped immediately,” Maas said.

“The politically responsible must resolve their differences in a peaceful dialogue,” he said. “They owe this to the people of Sudan who fought for an end to the dictatorship and for democratic change.”

A failed coup attempt in September fractured the country along old lines, pitting Islamists who want a military government against those who toppled al-Bashir more than two years ago in mass protests. In recent days, both camps have taken to the streets to protest.

Burhan warned in televised comments last month that the military would hand over power only to a government elected by the Sudanese people.

Under Hamdok and the transitional council, Sudan has made great strides. The country was removed from the United States’ list of state sponsors of terrorism, a move that opened the door for international loans and investment to revive its battered economy.

Sudan’s economy had suffered from decades of U.S. sanctions and mismanagement under al-Bashir.

The transitional government also officially criminalized female genital mutilation, a landmark move for the country and a sign of its commitment toward improving the rights of women and girls.