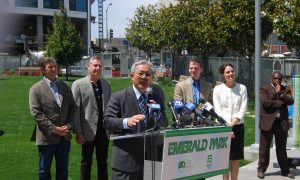 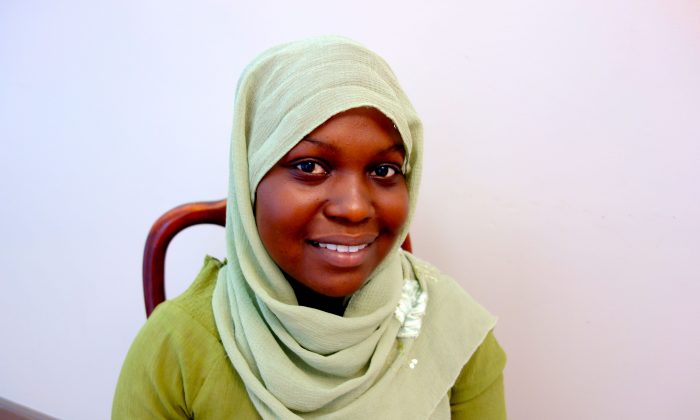 Basmat Ahmed lived in a refugee camp in Egypt after fleeing Darfur, and works to help more recent refugees in America. She led the effort for an inclusive garden for people with disabilities and refugees in Clarkston, Ga. (Mary Silver/Epoch Times)
US

CLARKSTON, Ga.—In the most diverse city in Georgia, just outside Atlanta, refugees and people with disabilities have carved a garden out of a previously little-used county park.

Basmat Ahmed left South Sudan—then Darfur—seven years ago, during a government-sponsored genocide. Today she works with Refugee Family Services to help others find a place in America. Among many other projects, she has led the way for a community garden in Clarkston, Ga.

Forty Oaks Park looks like the deep wood of fairy tales, with noble, century-old oaks. An enormous hawk glided low and tried, but failed, to catch another bird.

“Now that we have built the garden, people feel more comfortable using the park,” said Ahmed. It has a winding, pitted gravel road that curves out of sight. She said people use to feel unsafe going down the road into the old-growth forest.

Dekalb County cleared a space for the garden, but the gardeners themselves worked hard to prepare the soil, according to Ahmed. They had to dig out invasive running bamboo over and over again. They composted and built up rich, crumbly black soil.

A rainwater cachement system leads to three huge cubes with hoses snaking out. That’s how the gardeners water their plants. “I have seen people watering five or six plots besides their own. They are very unselfish,” said Ahmed.

Building a sense of belonging and caring for each other is the reason for the garden. According to the Georgia Council on Developmental Disabilities (GCDD) blog, “The Global Growers Network has teamed up with the (GCDD) as a new Real Communities Initiative to encourage international refugees and people with and without disabilities to come together and unite as an inclusive, welcoming community.”

In some other countries, people with disabilities are not involved in such projects; the inclusive garden gives the new Americans a different way to think of their capabilities, according to Ahmed.

Ahmed personally visited the homes of people to invite them to join.

Plots bear marigolds, lemon grass, sunflowers, cosmos, tomatoes, peppers, Asian long beans—purple and over a foot long—zinnias, eggplants, watermelons, and more. One plot is a tactile garden grown by and for blind people, with velvety leaves and fragrant plants. One plot holds mint, basil, oregano, and rosemary. “That’s an American,” said Ahmed with a smile.

Plot nametags showed the gardeners’ varied countries of origin. Bhutan, Sri Lanka, and Sudan were well represented. Time magazine called Clarkston the most diverse square mile in America, with more than 30 percent of its population foreign-born. The city’s website boasts that it has “60 languages spoken in a 1.1 square mile, that’s a new language every 100 square feet!” Commercial and medical signs near the garden are in English, Korean, and Amharic. It was a landing place for the lost boys of Sudan, and is home to the Fugees soccer team.

The next step is establishing a formal nonprofit friends’ group to channel community requests to the county. It’s underway, and it already has a wish list: pavilions, running water, a better entry road, and restrooms.

The county will support the park, but the park has to be what the community wants, not a plan imposed from officials or higher-ups, according to Ahmed.

People at the park are not just growing food and flowers, they are also learning leadership and taking charge of their lives after the disorienting experience of being forced to leave their countries.

In a video produced for GCDD, Renu Dulal from Bhutan said, “I like America and I like the garden. … I go to the garden; I’m very happy.”