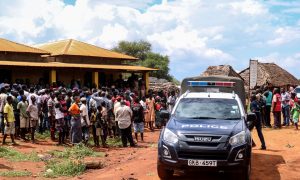 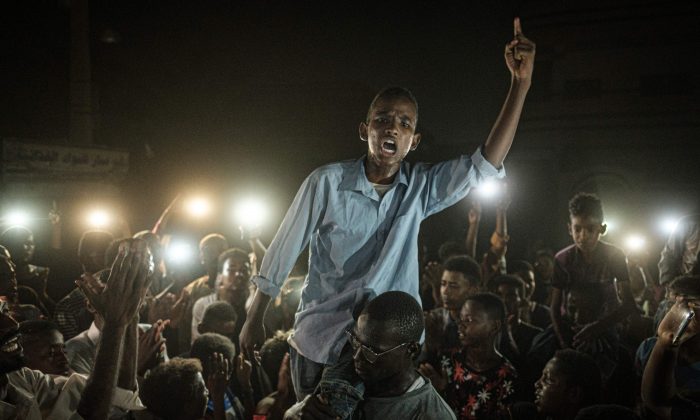 People chant slogans as a young man recites a poem, illuminated by mobile phones, before the opposition's direct dialog with people in Khartoum, Sudan on June 19, 2019.(YASUYOSHI CHIBA/AFP/Getty Images)
Africa

NAIROBI, Kenya—Violence and civil unrest continue in Sudan even as mediation efforts spearheaded by the African Union are gaining momentum.

“The polarization is still dominant but we are waiting for the mediators to break the deadlock,” Hassan Hajji Ali, a professor of political science from the University of Khartoum, told The Epoch Times from the Sudanese capital.

Sudanese demonstrators have now called for night rallies and marches in the capital of Khartoum and across the country, in response to the recent killing of peaceful protesters by the military authorities. The protests are also aimed at pressuring the military council to hand over power to a transitional civil authority.

“Our triumphant revolution is reconstructing across Sudan in cities, villages, and in the countrysides,” the Sudanese Professionals Association said in a statement, adding the “evening demonstrations” are in condemnation of the June 3 massacres.

The association, which has led the protest movement since December, said its members are facing a deadly crackdown from the military authorities.

Violence has intensified in the North African country of 40 million since the ouster of President Omar Hassan al-Bashir after 30 years of autocratic rule.

In Nairobi, police on June 19 dispersed a group of Kenyan and Sudanese activists who had assembled at the city’s Uhuru Park to express solidarity with protesters in Sudan, who have been pressing for a transitional civilian authority from the military rulers.

“It has become clear that the Transitional Military Council has no intention of handing power to the people,” said Mohammed Farouk, a Kenyan-based Sudanese national who took part in the solidarity march.

“We hope the current standoff will be solved soon, so we can have stability in Sudan,” added the 45-year-old businessman, who said he fled his motherland to live in exile, to escape the political crisis.

But human rights groups are calling for urgent investigations by the United Nations and African Union, citing “the escalating human rights violations.”

“The senseless killing of protesters must be stopped immediately, and those responsible for the bloodbath, including at command level, must be held fully accountable for their actions,” said Sarah Jackson, Amnesty International’s deputy regional director for East Africa, the Horn and the Great Lakes.

According to Amnesty International, more than 100 protesters were killed and hundreds more were wounded when the military ordered their dispersal.

On June 13, the Transitional Military Council’s spokesperson, Lieutenant General Shams al-Deen al-Kabashi, issued a statement about the decision taken to clear the protester sit-in area near the military headquarters in Khartoum, according to the UK-based human rights campaign group.

The U.S. Embassy in Khartoum said the airport in the Sudanese capital is still open, though “some flights have been canceled or are being rescheduled.”

On June 6, the African Union suspended Sudan’s membership from the pan-African grouping of 54 member states to press the ruling transnational military council to transfer power to civilian authorities.

Meanwhile, mediation talks, led by Ethiopian Prime Minister Abiy Ahmed and aimed at resolving the impasse between the protesters and the Sudanese military junta, are in their initial stages, the Sudan Tribune newspaper reported.