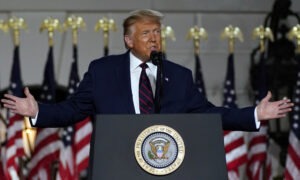 Trump: Success Is Going to Bring Us Together

In his final words of the second and final presidential debate before Election Day, President Donald Trump told the gathered crowd that success is ultimately what will unify the nation and that the country is on the road to success.

Debate moderator Kristen Welker of NBC News asked her final question of the night at Belmont University in Nashville, Tennessee, “Imagine this is your inauguration day. What will you say in your address, to Americans who did not vote for you?”

The question was the only one that was focused on the topic of leadership.

Trump, who was asked to respond first, said, “We have to make our country totally successful, as it was prior to the plague coming in from China. Now we’re rebuilding it and we’re doing record numbers, 11.4 million jobs in a short period of time, et cetera.”

“But, I will tell you, go back—before the plague came in, just before, I was getting calls from people that were not normally people that would call me,” the president continued. “They wanted to get together. We had the best black unemployment numbers in the history of our country—Hispanic, women, Asian, people with diplomas, with no diplomas, MIT graduates; number one in the class, everybody had the best numbers—and you know what? The other side wanted to get together. They wanted to unify.

“Success is going to bring us together,” Trump said. “We are on the road to success.”

Trump said that he is “cutting taxes,” whereas Biden “wants to raise everybody’s taxes and he wants to put new regulations on everything. He will kill it.”

“If he gets in, you will have a Depression, the likes of which you’ve never seen,” Trump said. “Your 401(k)s will go to hell, and it’ll be a very, very sad day for this country.”

Democratic challenger former Vice President Joe Biden was also asked the same question. “What will you say during your inaugural address to Americans who did not vote for you?” Welker asked.

“We can grow this economy, we can deal with the systemic racism. At the same time, we can make sure that our economy is being run and moved and motivated by clean energy, creating millions of new jobs. That’s the fact, that’s what we’re going to do. And I’m going to say, as I said at the beginning, what is on the ballot here is the character of this country. Decency, honor, respect. Treating people with dignity, making sure that everyone has an even chance. And I’m going to make sure you get that. You haven’t been getting it the last four years.”

Thursday night’s debate had far fewer interruptions and heated exchanges than the first debate between the two candidates, giving both more time to share their stances on various topics including COVID-19, national security, health care, race, and climate change.

Trump throughout the night pointed to Biden’s nearly 50-year career as a politician, saying his stint in Congress over the past several decades was largely ineffective over multiple areas, including health care, criminal justice reform, and immigration. The president also questioned the former Vice President over his family’s foreign business deals including in Ukraine and China. Drawing a stark contrast to Biden over key issues, Trump spoke of himself as an advocate for opening up the country amid the COVID-19 pandemic, cutting taxes, and pushing for energy independence, while warning that Biden’s plans will economically affect everyday American families.

Biden painted the president’s COVID-19 pandemic response as inadequate, drawing attention to the number of deaths caused by the CCP (Chinese Communist Party) virus in the country while claiming repeatedly that the president has “no plan” to manage the crisis. He also portrayed the president as someone controlled by foreign interests and as a racist who has no plan for health care. Biden also accused Trump of avoiding paying taxes, citing a New York Times report that claimed insight into the president’s tax returns.

At less than two weeks until Nov. 3, a record 47 million Americans already have cast ballots in early voting.