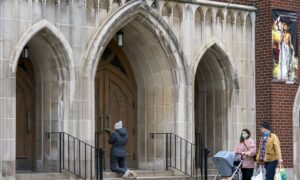 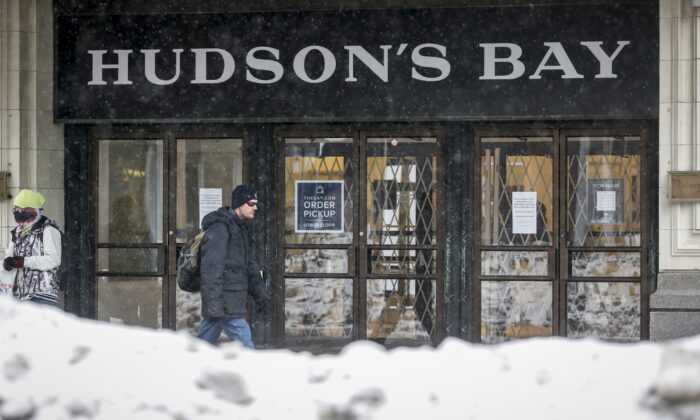 A Hudson's Bay store in Calgary on March 18, 2020. The company has launched legal action against lockdown measures in Ontario. (The Canadian Press/Jeff McIntosh)
Canada

Success and Failure in Court Challenges Mounted Against COVID Restrictions

Restrictions to slow the spread of COVID-19 in various provinces have led some business, churches, and individuals who see the measures as unfair to resort to legal action, with mixed results.

In Ontario, Canadian Appliance Source challenged the COVID-19 restrictions that have closed seven of its locations in Vaughn, York, and Toronto, but it had its case dismissed by the Ontario Superior Court.

“In the immediate case, the legislature intended the conventional everyday meaning of ‘hardware store’ and [Canadian] Appliance’s business is not what is conventionally known as a hardware store,” Perell wrote in his Dec. 10 decision.

Shave said business at the locations affected by the lockdown is being done via online video with sales staff. However, he said business has fallen 80 percent at each location, and over a month that could cost $5.6 million in sales compared to the same period in a regular year.

“Our average purchase is over two grand, so there’s a higher percentage of the population uncomfortable making that purchase without some physical aspect to the process,” he said, adding that their showrooms deal with low customer volumes compared to others.

“I understand groceries and pharmacies need to be open, but a Home Depot is allowed to stay open too, and they probably have foot traffic of thousands of people a day. Why would you make such a fine definition that hardware stores could be open but nobody else? Because I’m sure it’s pretty easy to do curbside pickup for a hammer.”

Dec. 10, the same day Canadian Appliance Source lost its bid to keep its doors open across the Greater Toronto Area, Hudson’s Bay Company sued on similar grounds in the Ontario Superior Court, describing lockdown measures that shut a dozen outlets in the province as “incoherent and devoid of logic.”

“The Ontario Government’s health data shows that retail shoppers are not contributing to COVID-19 spread in any significant way,” the company said in a statement after filing its case.

“On behalf of thousands of large and small retailers in Toronto and Peel, we have been left with no choice but to ask the Court to recognize the unfairness of the current situation and the need for a fair and evidence-based solution that puts health and safety first and doesn’t jeopardize the livelihoods of thousands of retail workers, or the future of many businesses.”

The iconic company’s position that the COVID science doesn’t gel with pandemic edicts is similar to the Springs Church lawsuit against the Manitoba government for provincial restrictions on gatherings.

Springs Church had argued that its drive-in outdoor services, where occupants remained inside vehicles, did not pose a COVID transmission threat. It has racked up more than $32,000 in fines for allowing the services.

The Winnipeg church at first lost its court challenge, on Dec. 5, with Manitoba Court of Queen’s Bench Chief Justice Glenn Joyal setting aside determination of any Charter of Rights and Freedoms implications of the case for a later date. Then, three days later, the province made exemptions for drive-in events.

“[Springs Church] felt that they weren’t in violation of the health order, and so there was no risk to the public if the services were conducted in accordance with the medical evidence that they put before the court,” said the church’s lawyer, Ken Williams.

“The court didn’t see that as being determinative. They felt the restriction on gathering was more important at the time. … They’ve since changed, permitting what it was we were trying to get them to permit.”

Back in the GTA, the Toronto International Celebration Church was in the midst of litigating its own challenge of Ontario pandemic restrictions that prevent religious gatherings of more than 10 people. It’s a case that, like those of Hudson’s Bay and Canadian Appliance Source, seeks parity with other businesses that are allowed to open.

“We know that we have the Constitution with us. There’s a provision in the Canadian Charter of Rights and Freedoms for religious freedom,” founding pastor Peter Youngren told The Epoch Times on Dec. 15, after a day of providing testimony in the Ontario Superior Court.

“And so our approach was equality under the law. We want to be treated equal to a Costco or a Walmart. What we are looking to is for a church, synagogue, or mosque not to be treated in a way that’s discriminatory compared to other institutions and businesses.”

Youngren said he expects a ruling on Dec. 18.

In Alberta and Manitoba, the Justice Centre for Constitutional Freedoms has filed class-action lawsuits on behalf of individuals, businesses that so far include a gym and a restaurant, as well as religious groups.

Justice Centre lawyer James Kitchen said similar cases will be filed in Saskatchewan, Ontario, and British Columbia. Going this route, he said, bolsters an eventual Supreme Court of Canada challenge that will not only include religious freedoms but an untested Section 7 Charter challenge that ensures “security of the person.”

“If ever there was a situation where that argument could be made with success, it would be this, because this isn’t just merely reducing profits for a little while. This is putting owners and people out of business, into bankruptcy, into poverty, to the food banks,” said Kitchen, who is slated to argue for a preliminary injunction in Alberta early next week.

“Because we have this wholesale abrogation of rights all across different sectors of society, the natural consequence of such extreme authoritarian government action is, you’re not getting one or two rights violations, but seven or nine.

“And if you’re going to go after this thing, you either have to go at it whole, or piecemeal. Ours are global actions—we’re going after all the restrictions.”