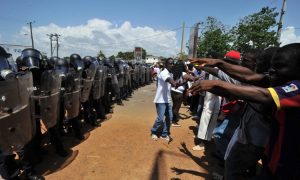 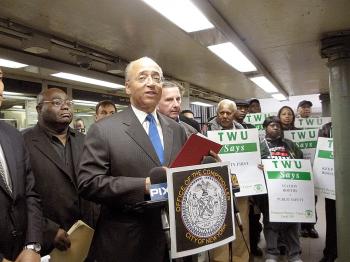 STATION AGENTS: City comptroller Bill Thompson and the Transit Workers Union protest the MTA's plan to phase out service agents. They say that it would significantly compromise safety in the subway. (Christine Lin/The Epoch Times)
US

By Christine Lin
biggersmaller
Print
NEW YORK—The MTA is determined to cut subway agent jobs in 199 stations across the city, despite receiving $2.3 billion in state money in exchange for the promise not to cut direct services to riders.

Thompson was joined by transit advocates to protest the cuts. “It's penny wise, pound foolish to think of removing eyes and ears from stations in this time of random violence and terrorism,” said Andrew Albert, chair of the New York Transit Riders Council. The Council is partially responsible for designing maps and signs for the MTA.

Of the 199 stations where coverage will be cut, 158 are manned by station agents and 41 have token booths. The Transit Workers Union Local 100 estimates that close to 700 workers will be affected.

The MTA said that it will not actively lay off station agents, but rather reduce the number of agents by attrition—waiting for them to quit or retire.

“Whether it's by attrition or not, it is still a service cut,” Thompson said during a press conference on Monday at the 77th St. station on the number 6 line, Mayor Michael Bloomberg's home station. Thompson is taking the matter to MTA Chair H. Dale Hemmerdinger. In an open letter to the chair, he argued that the value of station agents should not be measured by the number of customers they serve, but “by the feeling of safety they help bring” to riders.

In one year, an average of 60,000 emergency calls are placed by station agents via the emergency communication system, according to Andreeva Pinder, a union leader who represents station agents. In her 25 years working for the transit agency, she has seen firsthand the role station agents play in rider safety.

“I've had someone have a heart attack right in front of the booth,” she said. “I've had someone come off the street shot and bleeding because they knew they could get to a booth and find help.”

As it stands now, there aren't enough station agents. Many stations where the two platforms are not connected underground have booths on only one side. “If a senior or a handicapped person needs to speak to an agent, I would have to tell them to go across the street,” she said. “And that would mean they'd have to climb up the stairs, go to the other side, and then do it all over again.”

Pinder believes that the human element is irreplaceable. While video cameras are present in all subway stations, “Who's gonna watch them?” she asks. “There are 468 stations in the entire system.”

The MTA had said that it would go through with the cuts even with the bailout, but it isn't until now that the public has caught on to the possibility that it might actually happen, said Council Member Bill deBlasio. “The public was concerned with the fare hike, and the cutting of bus and subway lines,” he said. “People thought that the entire system was to be dumbed down and that's where the focus was.”