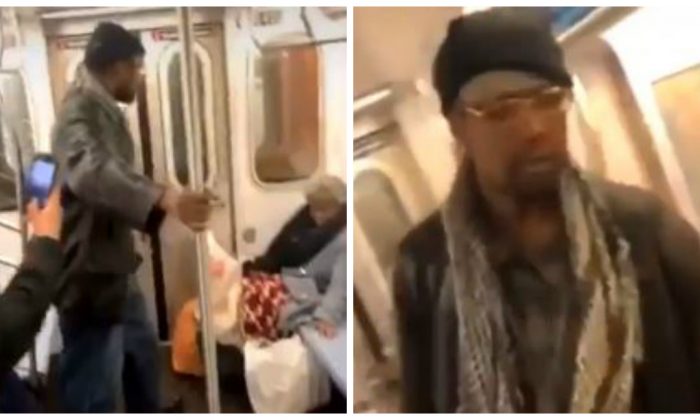 A man was filmed punching a woman in the face on the New York City subway on March 10, 2019. (Rello/Twitter; NYPD)
NY News

Subway riders in New York City got out their phones and filmed a man viciously kicking an elderly woman in her face instead of intervening in the brutal assault.

One video was posted to social media by Hakeem Carew and circulated to Twitter by a user named Rello. That video alone was viewed nearly than 9 million times at the time of this publication.

The footage showed a man assaulting an old woman, 78, while she was sitting on the subway around 3 a.m. on March 10, the New York Police Department (NYPD) said.

The woman tried to defend herself, holding up her arms to try to block the blows.

Meanwhile, at least two people filmed the assault and did nothing.

Shouts can be heard in the background but no riders came to the woman’s defense.

As the train pulled into a station, the man yelled something at the elderly victim before turning around and looking at one of the people filming.

“WorldStar that, my [expletive],” he said, directing the person to upload the footage online.

This is disgusting, and it’s pathetic that no one helped. If both people filming had stepped in and kept this guy from leaving, he wouldn’t still be wandering around. If you see this man, who repeatedly kicked an elderly woman in the face, report him. https://t.co/3v6ps3bhot

The man then exited the train.

The person filming continued standing still and recording instead of going to the woman and helping. She was seen holding a hand to her head and was in obvious pain.

No one called 911 right away, police officers told the New York Post.

Officers were finally notified when the train arrived at the next stop, when someone who witnessed the assault got off the train and told an officer at the station.

Individual below is WANTED for a heinous attack of an elderly woman aboard a #2 train on March 10, 2019, at approx 3:10am, at the Nereid Ave Station in the #Bronx. If you know who he is or have info, contact CRIMESTOPPERS @NYPDTips ANONYMOUSLY 800-577-TIPS #YourCityYourCall pic.twitter.com/mmrhdkEhmh

The victim was treated at the station by medics who responded to the scene but declined to go to a hospital.

NYPD Chief of Detectives Dermot Shea took to Twitter to ask anyone with information to come forward to help police catch the man.

“If you know who he is or have info, contact CRIMESTOPPERS @NYPDTips ANONYMOUSLY 800-577-TIPS #YourCityYourCall.”

Twitter user Rello, who posted the footage, said that he was not there.

“For everybody asking me if this is my video. No and if I was there it was not going down like that. He was not getting away. New York City has to get better with ‘minding our own business.’ See something say something goes for everything,” he said.

“I only screen recorded the video to help catch this guy. You never put hands on any woman. Especially an older woman,” he added. “And any real New Yorker would’ve done anything but record this. These were obviously kids on the train with no real sense but to say ‘Ooos’ & ‘Ahhs.'”