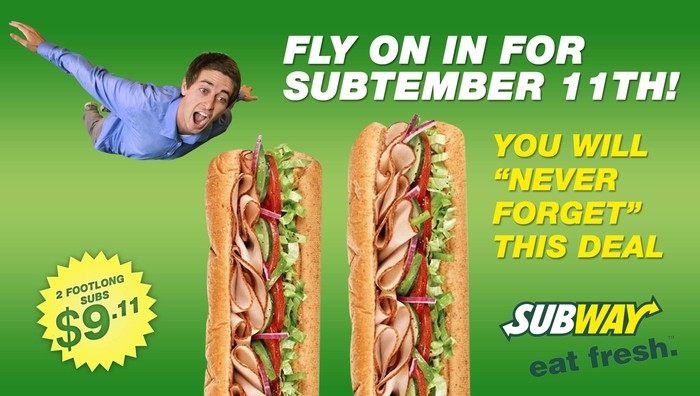 A fake ad created by The Onion, a satirical news outlet, that has offended Subway, and others. (The Onion)
US

One of the newest Onion articles has caused waves and sparked criticism from people, including Subway, the company featured in the article.

The Onion, a satirical website, published an article on September 6 about Subway planning a new promotion to honor “Subtember 11.”

“With a number of terrific discounts on special sandwiches as well as our classic footlongs, you’ll always remember where you were on Subtember 11,” Subway president Fred DeLuca told reporters, the article states.

“From the Structural Steel Melt on Tower 7–Grain bread to the Twin Chowers cold cut combo with Ground Zero–Carb vinaigrette on a Let’s Whole Wheat Roll, we’ve got something for everybody this Subtember 11.” DeLuca added that the special promotion will be “first responders, first served.”

The article is playing off of the ceremonial date of September 11, on which in 2001 the Twin Towers in New York City were struck by planes and almost 3,000 people were killed.

Subway responded to the article Friday night, saying it was not pleased with the article. See its reaction and a variety of reactions below.

[View the story “Reactions to ‘Subtempber 11′” on Storify]