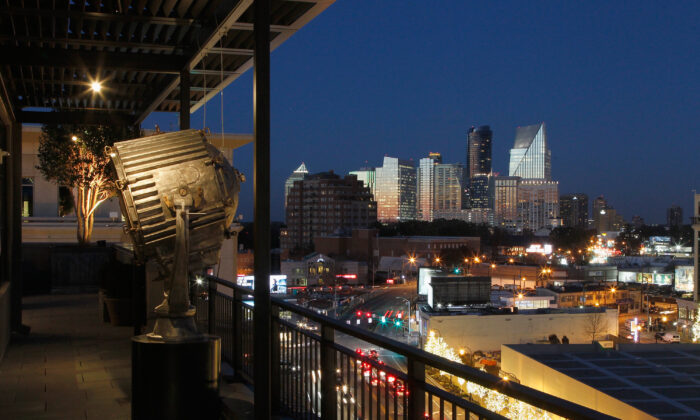 A general view from the rooftop veranda at the RH Atlanta: The Gallery at the Estate in Buckhead opening celebration in Atlanta, Ga., on Nov. 20, 2014. (Ben Rose/Getty Images for Restoration Hardware)
US News

The head of an Atlanta suburb, Buckhead, said Tuesday that his district is still trying to secede from the Georgia capital city amid surging violent crime rates.

“We are really feeling like this is a war zone, and I don’t say that lightly, especially given what you experienced in a war zone,” Buckhead City Committee CEO Bill White told Fox News. “This is murder and mayhem… We are dealing with a mayor who voted to defund the police.”

The wealthy Atlanta district has been attempting to become independent but has so far been unsuccessful. Earlier this year, both Republican Georgia House Speaker David Ralston and Senate Majority Leader Geoff Duncan have said they’re opposed to legislation that would put a Buckhead cityhood referendum on the November 2022 ballot.

White, however, said on Fox News that the district is still attempting to secede because “it’s obvious that police officers do not want to come work for a mayor or a city that does not back them,” adding, “Buckhead wants to take things into its own hands.”

“We’re short 180 police officers, so what are we supposed to do?” White said. “They said this has never been done taking a part of a city out and making its own city from that, but we’re going to do it, and we’re going to absolutely love our police.”

“We’re going to pay them, we’re going to give them a take-home car, we’re going to welcome them,” he added. “We’re going to honor them every day and make up for this dumbest move of the century, this ‘defund the police,’ and turn that on its heels and put the smackdown on the crime here in Buckhead once and for all, and have a happy place to live.”

During an interview in January, White explained that Atlanta’s Democratic leaders “don’t care” about the neighborhood at all and “just want the money” that comes from taxes in the wealthy area.

Atlanta’s crime rate, including rapes and homicides, soared during the COVID-19 pandemic, according to an analysis from WalletHub. The city ranked No. 3 among large U.S. cities for the highest increase in the murder rate behind Cincinnati and New Orleans. It was just ahead of Baltimore and Memphis.

As of mid-April 2022, “Atlanta has the 17th highest increase in homicides when we’re just looking at the Q4 numbers,” WalletHub’s Jill Gonzalez told 11Alive-TV. “So that is an increase not only from last year, but also up from 2019. So not only have we seen things increase from the pandemic, but also from pre-pandemic levels.”