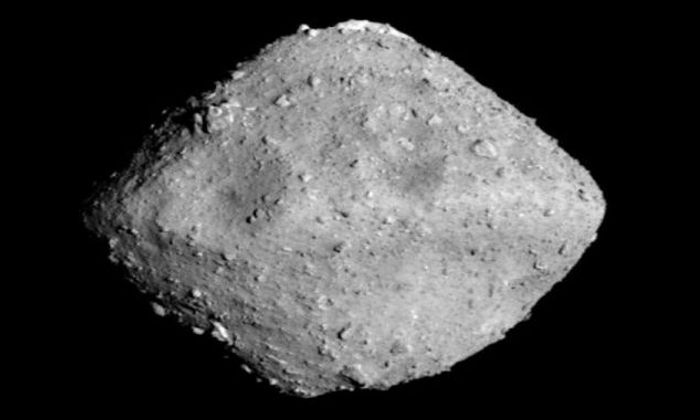 Asteroid Ryugu is photographed by the ONC-T which is equipped on Hayabusa 2 probe after a journey of around 3.2 billion km since launch, in outer space 280 million km from the Earth, on June 24, 2018 at around 00:01 JST, in this handout photo released by Japan Aerospace Exploration Agency (JAXA). (Mandatory credit JAXA-Tokyo University/Handout via Reuters)
Space

Researchers discovered up to 20 types of amino acids on asteroid samples obtained by the Japanese Hayabusa2 space probe in December 2020, essential substances for living things on Earth.

This is the first time amino acids—the building blocks of proteins—have been found on an asteroid, Kyodo News reported, citing an unnamed Education Ministry official.

A capsule containing more than 5.4 grams of surface materials arrived in Japan in December 2020 after a 6-year odyssey to the Ryugu asteroid, located over 300 million kilometers away from Earth.

The Japan Aerospace Exploration Agency (JAXA) and research institutes across Japan, including the University of Tokyo and Hiroshima University, commenced the complete analysis of the samples last year.

The sample analysis is expected to reveal more about the solar system formation and the origins of life on Earth. The previous analysis revealed that the asteroid contains primitive material rich in water and organic matter.

“Ground-based observations of asteroids and laboratory analysis of the optical properties of meteorites have suggested that C-type asteroids are the origin of carbonaceous chondrites meteorites, but no direct evidence has been obtained,” JAXA stated on its website.

Asteroids are believed to have formed at the dawn of the solar system, and scientists have said the sample may contain organic matter that could have contributed to life on earth.

The Hayabusa2—named for the peregrine falcon—orbited above Ryugu for a few months before landing, then used small explosives to blast a crater and collected the resulting debris. After dropping off the capsule, it changed course and headed back into space.