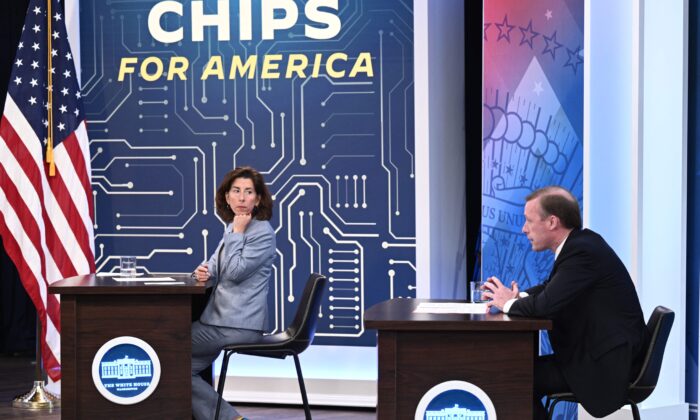 Secretary of Commerce Gina Raimondo listens as national security adviser Jake Sullivan speaks at a virtual meeting with President Joe Biden, CEOs, and labor leaders on the CHIPS for America Act in the Eisenhower Executive Office Building, next to the White House in Washington, on July 25, 2022. (Brendan Smialowski/AFP/Getty Images)
Thinking About China

Subsidies for Me but Not for Thee

Beijing fumes over the new CHIPS for America Act

Although only some $52 billion in Washington’s $280 billion CHIPS for America Act actually aims to boost semiconductor production in the United States, Beijing is furious and has promised retaliation.

China’s embassy in Washington has declared that Beijing is “firmly opposed” to the legislation officially called the Creating Helpful Incentives to Produce Semiconductors for America Act (and an especially creative acronym, too.) China’s embassy has also described the new law as reminiscent of a “Cold War mentality.” The chairman of China’s Semiconductor Industry Association said that parts of the new American law “violate fair market principles” and will “give China’s rivals a helping hand.” China’s Ministry of Commerce claims the act will “disrupt international trade.” Exacerbating tensions further is Washington’s decision to begin trade negotiations with Taiwan. Though it is unlikely that the United States will bend to China’s objections, the elements of Beijing’s threatened retaliation are not yet clear.

Beijing’s concern seems to center on how subsidies for semiconductor production in the United States will curtail Western investment flows. The funding is important to China, but so is the access to the Western technologies that investment brings. On both these points, Beijing has been exceptionally open about its dependence, stating that a domestic orientation for American-based producers will retard the Middle Kingdom’s efforts to build up its own semiconductor industry. It is a strange thing to say on the heels of Beijing’s innumerable boasts about China’s scientific and engineering prowess. Such utterances all but admit the country’s dependence on Western innovation. It also points up China’s urgent needs, for today, China’s chip manufacturing effort can only supply some 10-15 percent of the country’s demands.

For all Beijing’s fulminating on the subject, it is not apparent that the new U.S. law will divert chipmakers from whatever path they would otherwise have followed. Washington has indeed curtailed access by China’s leading chip maker, Semiconductor Manufacturing International Corp., to the cutting-edge ultraviolet lithography systems at ASML Holdings, but that has nothing to do with the CHIPS for America Act.

Seemingly in response to the law, Intel and the Taiwan Semiconductor Manufacturing Company (TSMC) have touted new domestic U.S. chip manufacturing facilities. Still, these projects were planned long before the legislation ever came near passage. Like several others, these firms responded less to prospective government support than to supply chain disruptions due to the pandemic and recovery. The new law encourages, of course, but these domestic efforts probably would have gone ahead without the CHIPS for America Act, except now they have access to taxpayer funding.

But then, as with so much else in Beijing (or Washington for that matter), differences have less to do with what is being done than with who is doing it. In this case, it is subsidies for me (China) but not for thee (America). Now the open question is how Beijing will retaliate and how Washington, in its turn, will respond.