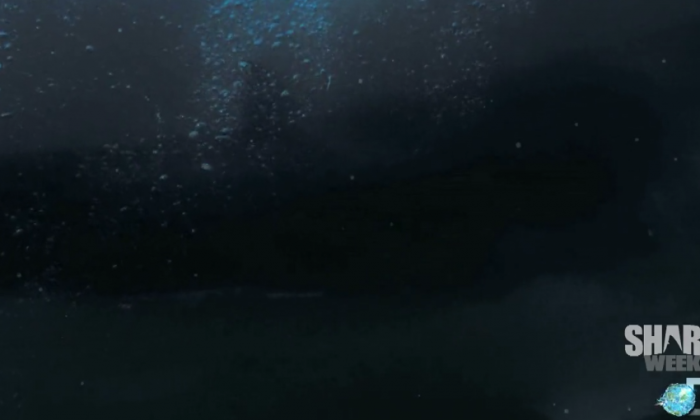 Arguments over whether the Shark Week program Shark of Darkness is real or fake has been raging every since it aired on Sunday night, but one thing is clear–the show did well enough to top cable ratings that night.

The one-hour program on the Discovery Channel, part of a weeklong focus on sharks, scored 1.9 million adults in the key 18-49 age bracket in Live + SD ratings.

That was good enough to top every other show that night, including True Blood, which came in at 1.8 million, reported TV by the Numbers.

Shark of Darkness did not win the overall ratings. With 3.8 million overall, it was behind both the NASCAR Sprint Cup on ESPN (4.9 million) and The Last Ship on TNT (4.6 million), but those shows both scored way less in the 18-49 bracket (1.1 million and 1 million, respectively).

The other programs on Shark Week on Sunday night also scored well. Air Jaws: Fin of Fury, which aired right before Shark of Darkness, brought in 1.5 million in the 18-49 bracket, good for third on the day. It had 3.2 million overall, good for sixth on the day.

Shark After Dark Live, Top Ten Sharkdown, and Return of Jaws were also in the top 20 of adults 18-49 ratings.

Many people are upset that the Discovery Channel is presenting all of the Shark Week programming as totally legitimate, despite the fact that some programs are suspect.

One disclaimer added to Shark After Darkness noted: “Its existence is highly controversial. Events have been dramatized, but many believe Submarine exists to this day.” It’s all made up, but hey, some people believe it, so who’s to say?”

Shark of Darkness was described as such:

“Said to be deadliest great white shark of all time, ‘Submarine’ is a 30 foot great white that has terrorized the shores of South Africa for decades.Locals believe this shark is responsible for countless fatal attacks, but existence has never been proven.”

Apparently the legend stems mostly from the 1970s and ’80s about a great white shark the size of a submarine swimming in and around Cape Town.

One South African blog, FromTheOld, claims that the legend started when a group of journalists got together at the also famous Tavern of the Seas, when they got in an argument about how easy it would be to fool the average newspaper reader. The story goes that they would post a fake eye witness account of a massive great white shark with a fake eye witness account. They would then see what happens.

The blog does note that the legend has some truth in that people were seeing a large shark or sharks decades earlier, although the name “Submarine” was given by the journalists.

The blog says that an eyewitness told it:

“My father tells the story of when he and my uncle went out fishing in a row boat. While out near Seal Island they spotted a dark shadow under the water. The Submarine swam past their little boat right at the surface of the water and my Dad says that once he could no longer see the head, he turned and could not see the end of the tail which was still coming past the boat. Apparently my uncle, out of pure terror, rowed the boat to shore at such a speed that it looked like he had two outboard motors powering the boat! My uncle has not been in the sea since that day (nearly 40 years ago now)!”

Zoologist Michelle Wcisel, based in South Africa, calls the Discovery Channel program about the submarine shark a “fake-umentary.”

“Everyone who has worked on white sharks has seen their version of the Submarine, but it does not actually exist. Think Loch Ness,” she said.

“I am a Zoologist specialized in behaviour, and have just completed my M.Sc. from the University of Cape Town studying the anti-predator tactics of Cape fur seals in Shark Alley, Geyser Rock, South Africa. Not once did I meet the researchers Shark of Darkness: Wrath of Submarine features, because they do not exist. They are actors. However, Discovery Channel has done a bit of googling and came upon our real great white shark wound healing research.

“Prop is a real great white shark that was wounded by a direct hit from a boat’s propeller in Gansbaai, South Africa. This shark’s injuries were first identified by the Dyer Island Conservation Trust. Prop’s remarkable 9-month recovery was documented (video) and the results were published in Global Perspective on the Biology and Life History of the White Shark. Prop has nothing to do with Submarine – neither the real legend or the made up story Discovery Channel produced. None of the researchers who published Prop’s recovery were contacted by Discovery Channel. Again, by including this real bit of information, Discovery is trying to legitimize their fake-u-mentary.”

Michael Sorensen, vice president of development and production for the Discovery Channel, says that the program is not fake.

“We’re talking about this legendary shark, Submarine, who has this dark past,” Sorensen told Entertainment Weekly.

“You gotta go into the heart of darkness to find something—well then, could this shark be the Shark of Darkness? It just kinda stuck, and we couldn’t shake it.”

But it seems that the scientific community is increasingly upset with the network, with some refusing to work with it.

“BBC – yes, Discovery – No,” said Eric Heupel, a graduate student at the University of Connecticut, told Discover Magazine. “Unless I and any other scientists on show had approval power on the edited version (so final airing version) of the show.”

“Maybe 5 years ago I would,” tweeted Erik Klemetti, a volcanologist at Denison University. “Right now, it would be hard to be convinced that it wouldn’t be total pseudoscience nonsense.”

“Shark Week seems to believe that real stories about real animals aren’t enough to get the public’s attention, so they lied,” University of Miami shark scientist David Shiffman told the magazine about another program. “I wish this surprised me.”