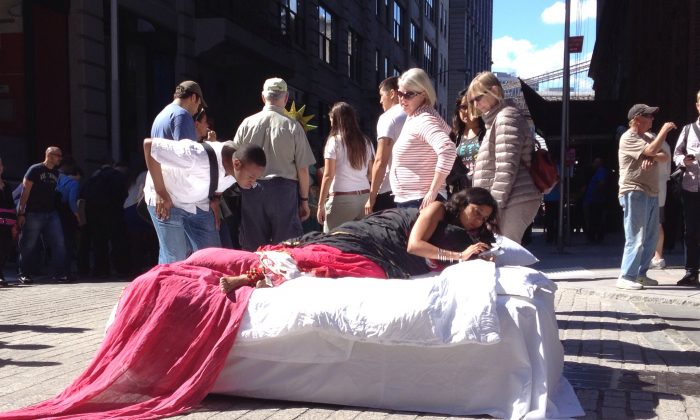 NEW YORK—At DUMBO’S massive arts festival this past weekend, many of the offerings aimed to be thought-provoking.

One of the standouts was a moving performing arts piece by Monica Jahan Bose, a Bangladeshi-American artist, lawyer, and activist based in Maryland.

Johan used a bright, 216-foot sari to wrap and unwrap her body along Water Street in an expression called “Sublime Virtue.”

According to the artist, her performance references the ancient Indian epic Mahabharata’s Draupadi, a mythological eternal virgin, and Bose’s grandmother, who was married at age 7.

As Bose twisted in and out of the fabric, her shimmering gold-painted toenails and the silver bells of her ankle bangles could be seen.

Bose’s performance was one of many at the DUMBO Arts Festival, now in its 17th year. The festival attracts over 200,000 people to the Brooklyn neighborhood over three days, according to the event website.

This year there was a parade with adults dressed as pink aliens, large pieces of neon-colored fruit, and more: a children’s fun house made out of paper-mâché, and a series of messages written on cobblestones covered with brightly colored plastic. There were also artists’ work for sale, booksellers, and ethnic food vendors.

Amid the many spectacles that could be seen, Bose’s moving contribution was a message about the burdens, as well as the strength of women.

The red, white, and pink fabric panels of the sari had intricate designs on it and messages written in Bengali. Her movements were simple, clear, and straightforward. There was no music or even talking. She didn’t make a sound, but you felt her despair.

Bose’s performance was one of seven arts installations of the South Asian Women’s Creative Collective (SAWCC). Shelly Bahl, a member of the board of directors of SAWCC, said all of the installations dealt with social issues.

Bose’s sari was made by 12 Bengali women in Katakhali, a tiny island and the artist’s ancestral village. The women there face challenges, including extreme poverty, illiteracy, and being married off at young ages.

Throughout the day, Bose performed on the cobblestone street until the bottoms of her bare feet were black, then rested on a bed used as part of the performance.

As Bose lay on the bed with the sari piled at her feet and her eyes closed, several people in the crowd that converged around her said, “This is weird.”

“What is this?” others asked, until they discovered the connection with the issue of child brides and other exploitation that girls and women face in developing countries.

Bose said that the bed represented the freedom to choose whom to love.

While on the bed, Bose displayed her cell phone number and an invitation to text her with comments and questions.

“I’ve been crying,” texted Bose after I sent her a message. “[This is] very emotional somehow.”

Just down the street on the East River, not far from shore, was another social message with roots closer to home. The “Ship of Tolerance” moored in the water just south of the Manhattan Bridge displayed 150 paintings by New York City children sewn together into a sail.

The paintings were artistic interpretations of tolerance—some had words on them, such as “love” and “peace” (one of which was written in Hebrew).

The festival ended on Sept. 29, but the ship envisioned by artists Ilya and Emilia Kabakov will remain on view until Oct. 8.