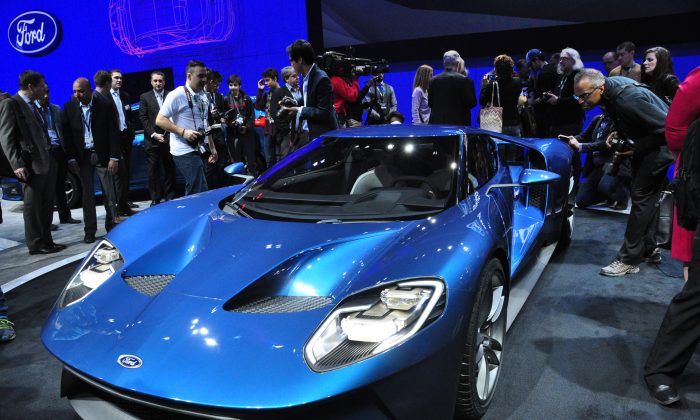 The 2017 Ford GT supercar on display. This 600 hp beauty will be built in Ford’s plant in Markham, Ontario. (Allen Zhou/Epoch Times)
Autos

Toronto hosts Canada’s largest auto show at the Metro Toronto Convention Centre each year in February. This year, the Canadian International AutoShow ran from Feb. 13 to Feb. 22. Here is a quick look at some of the highlights:

The Subaru Legacy 2.5i was a big winner of the 2015 Automobile Journalists Association of Canada’s (AJAC) awards, clenching the titles of Canadian Car of the Year and Best New Family Car (under $30,000), while the new aluminum-bodied Ford F-150 pickup truck took home the Canadian Truck of the Year award.

Ford had the new Ford GT sports car on display. This jaw-dropping 600 hp supercar was first unveiled at the North American International Auto Show in Detroit in January, and will go into production for the 2017 model year.

Also at the booth was the Shelby GT350 Mustang, an iteration of Ford’s iconic power beast that has under its hood a 5.2 L V8, cranking out 500 hp and over 400 lb-ft of torque.

Hyundai showed the 2015 Tucson Fuel Cell at its booth. This vehicle is going to be the first mass-production fuel cell electric vehicle available in Canada, beating the Toyota Mirai and the Honda FCV. The Tucson Fuel Cell claims a travel range of 425 km on a single tank of hydrogen.

In the Lexus area, the RC F GT3 racing concept was on display. Lexus intends to take this car to GT3 race circuits in 2015. The car is lowered, widened, and lightened, and its engine has been modified to put out more than 540 hp.

In its non-luxury sibling’s area, Toyota showed an intriguing i-ROAD concept. This tiny three-wheel electric vehicle seats two people in tandem to keep the body narrow, and it leans like a motorbike when turning.