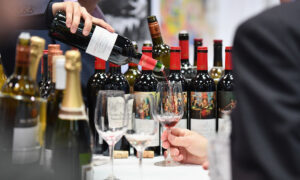 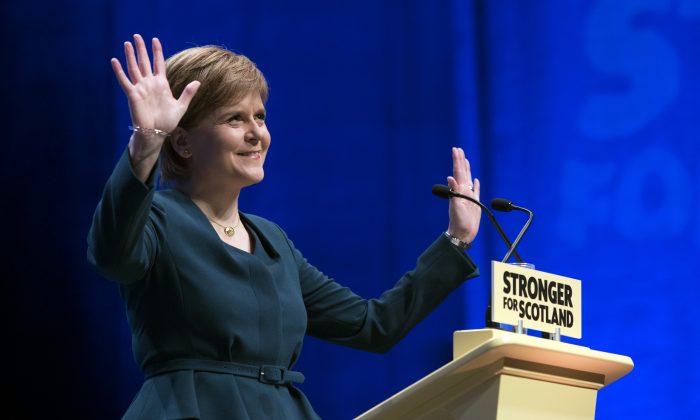 First Minister of Scotland and the leader of the Scottish National Party Nicola Sturgeon, at the start of the SNP's biggest-ever conference, in Glasgow, Scotland, on Oct. 13, 2016. (John Linton/PA via AP)
Europe

LONDON—Scotland’s leader has again warned that a second referendum on Scottish independence is likely if British leaders pursue a radical break with the European Union.

First Minister Nicola Sturgeon closed the Scottish National Party conference in Glasgow on Saturday with a vow to take action to keep Scotland inside the EU’s enormous single market even if Britain leaves.

She said if the British government rejects those efforts and takes steps to hurt Scotland’s economy she would “make sure” that Scots get another chance to choose a better future.

UK Pound Endures One of Its Worst Days

The pro-independence Sturgeon had said Thursday that her government would shortly publish a bill laying the groundwork for a new independence referendum—the first step toward a new vote on whether Scotland should leave the U.K.

An earlier referendum in 2014 ended with Scottish voters opting to remain part of the United Kingdom.

Sturgeon says the UK that existed in 2014 will no longer be in existence if there is a so-called “hard Brexit” departure—one that severs economic ties to Europe’s markets and leads to a lowering of living standards and unemployment in Scotland.

She pointed out that Scottish voters had indicated a strong desire to remain in the EU in the June 23 referendum. They were joined in that view by residents of London and Northern Ireland, but a majority of British voters cast ballots in favor of leaving the 28-nation bloc.

British Prime Minister Theresa May has said she will start the formal process to withdraw from the EU by March 31, 2017. The complex process is expected to take at least two years.

In another sign that Sturgeon is determined to place Scotland on its own path, she said she plans to open a Scottish “trade and innovation” hub in Berlin, the German capital, and to set up a trade envoy system to pursue Scottish business links.