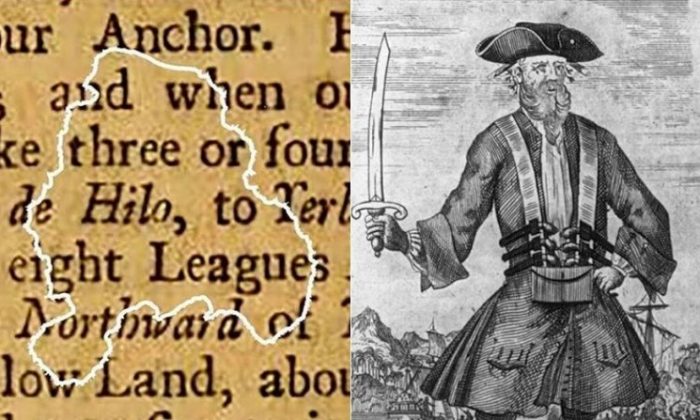 Experts analyzing the remnants of a pirate shipwreck announced a stunning discovery after linking several paper fragments found aboard the vessel to an 18th-century book.

The paper fragments were found aboard the flagship pirate vessel, Queen Anne’s Revenge. The boat ran aground off the coast of North Carolina in 1718, National Geographic reported.

The ship was confirmed in 2011 to belong to notorious pirate Blackbeard. Scientists have lifted parts of the ship to the surface over the years, including several cannons, jewelry, and tools, according to Fox News.

The North Carolina Department of Natural and Cultural Resources (NCDNCR) says that 16 paper fragments were found in “a mass of wet sludge” inside one of the cannons. The largest pieces were about the size of a quarter.

“As the work progressed another discovery was made — that there was still legible printed text on some of the fragments, although only a few words were visible,” explained NCDNCR, in its statement. “The challenge then became not just to conserve the paper fragments, but also to identify where they were from.”

The book was a narrative of a voyage, a genre popular at the time. The book chronicles a journey by two ships that sailed from England in 1708. The leader of the expedition, Captain Woodes Rogers, also wrote a book about the voyage.

Rogers and Cooke both describe how they rescued a man marooned on an island for four years. The description of the episode later inspired Daniel Defoe to write the famous novel “Robinson Crusoe.”

“Although books like these voyage narratives would have been relatively common on ships of the early 18th century, archaeological evidence for them is exceedingly rare, and this find represents a glimpse into the reading habits of a pirate crew,” NCDNCR explained in a statement. “The historical record has several references to books aboard vessels in Blackbeard’s fleet, but provides no specific titles; this find is the first archaeological evidence for their presence on QAR [Queen Anne’s Revenge].”

NCDNCR will hold several events to mark the anniversary of Blackbeard’s death later this year.

Experts are still working to document the other paper fragments.