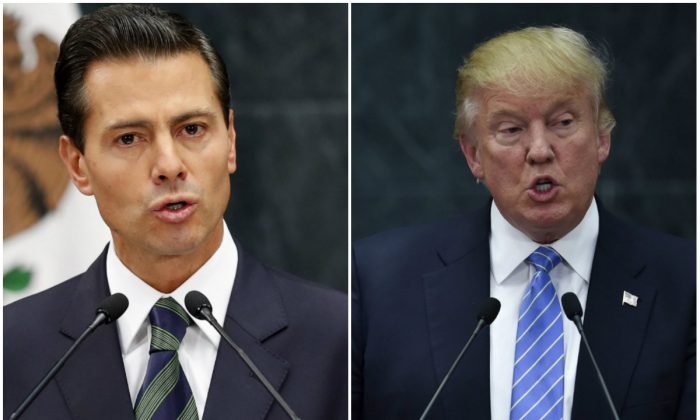 MEXICO CITY—Hours after the United States elected Donald Trump to be its next president, Mexico began carefully laying the groundwork for a relationship with a new leader who campaigned against its citizens and threatened to wreak havoc with its economy.

President Enrique Pena Nieto sent a series of messages from his official Twitter account Wednesday morning, congratulating not Trump himself but the American electorate, and said he was ready to work with Trump to advance the countries’ relationship.

“Mexico and the United States are friends, partners and allies that must continue collaborating for the competitiveness and development of North America,” Pena Nieto wrote.

The messages came shortly after Mexico’s Treasury Secretary Jose Antonio Meade tried to strike a reassuring tone in a news conference by saying that Mexico’s financial position is strong in the face of a falling peso. He says no immediate actions are planned.

Trump Election Elicits Fears, Some Cheers Around the Globe

But the threat is real. The United States is Mexico’s largest trading partner and the North American Free Trade Agreement, which Trump has said he wants to re-negotiate, is the backbone of that commerce.

“The relationship of Mexico and the U.S. is uncertain,” said Isidro Morales, of the Monterrey Institute of Technology and Higher Education. “Donald Trump is not a person of institutions. Surely it will be a unilateral policy worse than (George W.) Bush and we don’t know what to expect.”

Mexico’s currency appeared to track Trump’s rising and falling fortunes throughout the campaign and fell sharply Tuesday night. According to Banco Base, the peso dropped 9.56 percent, its biggest daily loss since 1995.

In the streets, Mexicans fretted about just how many of Trump’s promises to deport millions of immigrants, revamp trade relations and make Mexico pay for a border wall would come to fruition.

Reyes Isidro, a barista in a small neighborhood coffee shop, said that one way or another he was sure the poor would bear the brunt of Trump’s policies, even in Mexico.

“In the end, the most affected are always those of us who have the least,” Isidro said. “We’re the ones that have to take the hits.” He said the weaker peso would make it more difficult to buy things.

And if Trump follows through on his promise of increased deportations, “what are those people going to do? They will have to find a way to survive on this side. The possibilities begin to narrow for you,” he said.

Jose Maria Ramos, a professor at the College of the Northern Border in Tijuana, said Mexicans will have to wait and see what Trump really does.

“A lot of proposals had a marketing effect,” he said. “It’s one thing to be a politician and make statements; he managed the media very effectively.” But things like building a wall and making Mexico pay for it could turn out to be too complicated to carry out. “Being a candidate is not the same as being president.”