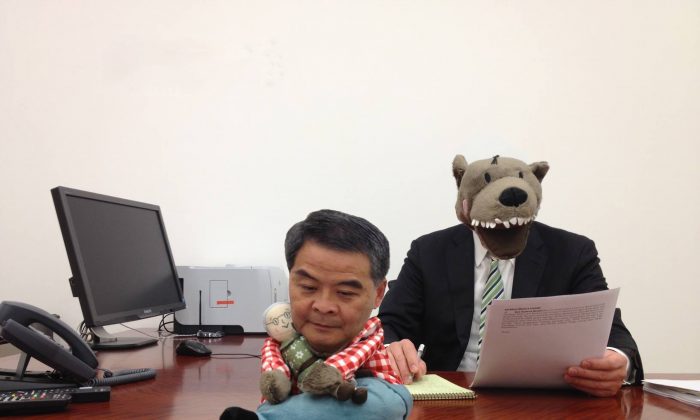 Hong Kong Chief Executive Leung Chun-ying with Lufsig, the stuffed wolf from Little Red Riding Hood who inspired Leung’s new nickname. Leung cheerfully placed the wolf on his desk and put the photo on his blog, but netizens soon came up with their own version. (Internet photo)
China

It started with an unfortunate mistranslation. The toy’s official Swedish name, Lufsig (the wolf in Little Red Riding Hood), was translated in China as “Lo-Mo-Sai.” The retailer, IKEA, didn’t realize that this sounds very much like an obscenity in Cantonese, the main dialect spoken in Hong Kong.

Since Leung Chun-ying’s nickname is “wolf,” Hong Kong citizens quickly found a creative way to express their frustration and discontent with him. By throwing a Lufsig toy at him during a forum, they took advantage of a play on words: “throw you Lo-Mo-Sai” sounds like “f*** your mother” in Cantonese.

Within a few hours, all Lufsig toys in Hong Kong IKEA stores were sold out.

The mainstream media avoided quoting the indecent term directly, but Lufsig’s new name quickly became viral online and was greeted by most with cheers and glee. Some also expressed worry over the tightening control over the media in Hong Kong.

Columnist Adrian Chow wrote a satirical article called “Goodbye Lufsig!” in the Dec. 12 issue of the Hong Kong Economic Times, only to find that it was unexpectedly censored.

In the satire, he wrote that the popularity of Lufsig illustrates citizens’ discontent and grudges against the government of Leung Chun-ying. The article ended with an imaginary scene in which the public sets fire to mountains of Lufsig toys in the middle of a stadium, chanting “burn Lo-Mo-Sai”—which also resembles a profane term.

Chow told the Epoch Times that he was surprised when censors deleted Leung’s name from his article without even notifying him. The deletion distorted the theme of the article, making it sound as if the public discontent had nothing to do with Leung.

Chow called it a tragedy that the encroaching media censorship isn’t just limited to solemn subjects like news that might displease or embarrass China. It has grown to include jokes among the citizens and turned Leung’s name into a taboo word.

How did Leung himself react to all this? He posted a picture of himself and the stuffed wolf on his official blog, apparently accepting the title of Lufsig with cheer.

IKEA rushed to replenish their stocks of Lufsig toys throughout Hong Kong, Taiwan, Singapore, and other places where it was selling out. They also changed the name on Dec. 11 to “Lo Fook Sai,” apologizing for the translation error.