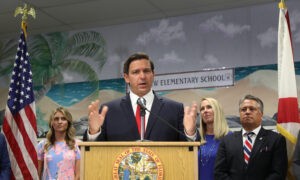 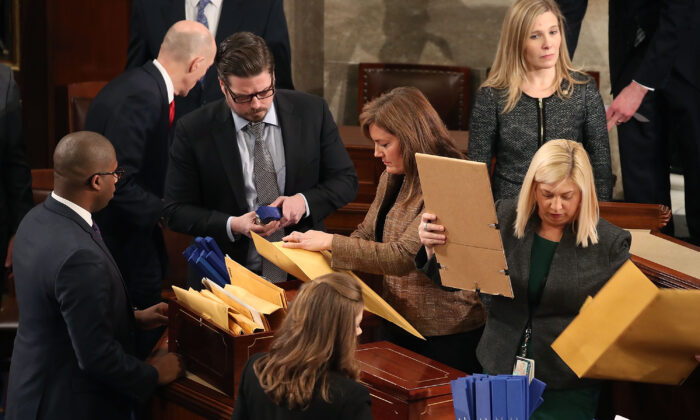 Staffers organize state's ballots during the counting of the electoral votes from the 2016 presidential election during a joint session of Congress, on Jan. 6, 2017. (Mark Wilson/Getty Images)
Politics

National elections in which the candidate who wins the most electoral votes and becomes president despite losing the popular vote, as what happened in the 2016 matchup between Republican Donald Trump and Democrat Hillary Clinton, are likely to happen again when the two candidates are separated by small margins in the popular vote count, according to a new study.

The findings are likely to amplify calls on the left to abolish the Electoral College system prescribed by the Constitution, or to change how it works through the National Popular Vote Interstate Compact that is working its way through state legislatures.

But those on the left, such as Democratic presidential candidates, including Elizabeth Warren, a U.S. senator from Massachusetts, and Beto O’Rourke, a former U.S. representative from Texas, who have called for getting rid of the Electoral College, say the current system is unfair.

A March poll by Hill-HarrisX found 60 percent of Democratic voters support abolishing the Electoral College, so the candidate who receives the most popular votes nationwide becomes president.

Although some Republicans want the method by which presidents are elected changed, most don’t appear to feel that way. Trump himself has called the Electoral College “genius.”

The non-peer-reviewed working paper by three economists at the University of Texas at Austin, Michael Geruso, Dean Spears, and Ishaana Talesara, is titled “Inversions in US Presidential Elections: 1836-2016.” The paper, a copy of which was obtained by The Epoch Times, was published by the Cambridge, Massachusetts-based National Bureau of Economic Research.

Over the past 200 years, the presidential candidate with the most votes cast by individual voters has failed to win the election around 8 percent of the time, the report states. These “electoral inversions” have long been controversial and more than 100 constitutional amendments to change the system have been proposed by federal lawmakers over the past two centuries, the paper states.

There have been four electoral inversions in presidential elections: 1876, 1888, 2000, and most recently in 2016, when Trump defeated Clinton.

“Is it merely coincidence that all inversions have involved a popular vote majority for the Democrat and an Electoral College win for the Republican? The answers to such questions are not obvious because the sample of Presidential elections is small … making it difficult to distinguish statistical flukes from events that were ex ante probable.”

“What is fundamental to the Electoral College is that an inversion is very likely in a close election,” Spears, an assistant professor of economics, told The Huffington Post.

“Voting in an election where the winner loses the popular vote is a fact of political life for American voters,” the paper states.

The closer the race, the more likely it will end in an inversion, according to the paper, whose authors state that to the best of their knowledge, “no other study has produced an empirical estimate of these parameters.”

According to a running tally maintained by National Popular Vote (NPV), a group promoting a national pact that would force states to cast their Electoral College votes in favor of the national popular vote winner, legislation aimed to implement the plan has been adopted in 15 states plus the District of Columbia, representing a total of 196 electoral votes.

But one of those states, Colorado, may rescind its enabling legislation next year, since opponents of the plan placed a referendum on the ballot to repeal pro-NPV state legislation. The plan, NPV claims, would become effective when enacted by several more states with 74 more electoral votes, taking the total to 270 out of 538, the absolute majority required to win the presidency in the Electoral College.

Conservatives say the plan would fundamentally alter the nature of American governance, without following the long-honored process that has been used to amend the Constitution.

Christian Adams, president of the Public Interest Legal Foundation and a former Justice Department civil rights attorney, told The Epoch Times earlier this year that the enactment of the NPV proposal for the popular election of the president would be disastrous for the country.

“It is an effort to dissolve the Union,” he said. “States who sign on are behaving like secessionists in 1861 and are aiming to undo the Union.”