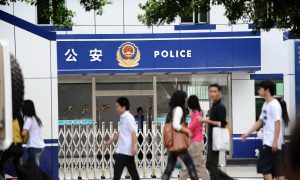 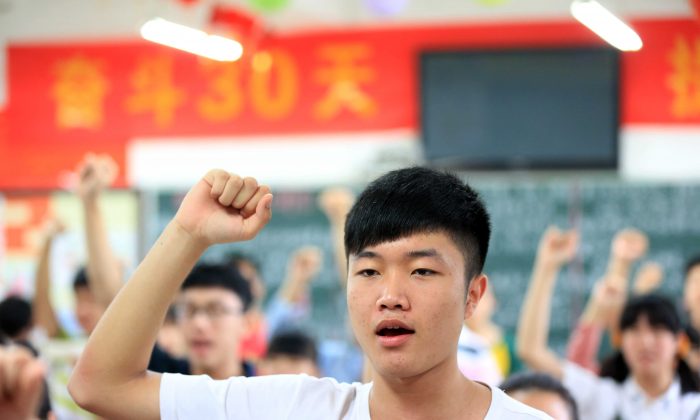 Students vow to obey the exam regulations before sitting the 2014 university entrance exam of China, or the "gaokao", in Bozhou, east China's Anhui province on June 7, 2014. (AFP/AFP/Getty Images)
China

June 7 this year marks the start of China’s gaokao, or national university entrance exams. Almost every senior high school class has slogans put up to encourage the students to work hard.

Here are some of the amusing, crazy, and sometimes controversial mottos reflecting the high-stress, high-expectation atmosphere surrounding the exams that have gone viral on the Chinese internet.

These slogans aren’t created for fun by the students themselves—instead, they’re hung on classroom walls and above blackboards, in an apparent attempt to motivate, or scare, students into studying harder.

#6: ‘As long as study doesn’t kill you, you should study to the death’

Also: “you may be tired to death, but your whole family will gain happiness.”

#3: ‘Reflect yourself on three aspects. Are you tall, are you rich, and are you handsome? If not, get back to your studies!’

This is a play on a famous quote by Zeng Shen, one of Confucius’ best-regarded disciples. The original reads: “Every day I reflect on myself on three aspects: was I disloyal in my conduct? Was my conversation to classmates and cobelievers not congruent with the facts? Or did I spread any idea without practicing it?”

#1: ‘If you don’t study well, how are you going to afford all your kept women?’

Some Chinese educators have spoken against the promotion of such shallow, materialistic values to motivate high school students in their studies. Xiong Qingnian, a director at Shanghai’s Fudan University, told Chinese state media Peng Pai that such slogans reflect the extreme worship of utilitarianism.

“It’s a spiritual opium that poisons students. Is there any positive energy? I find only negative energy,” Xiong said.