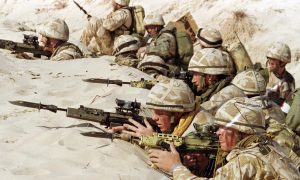 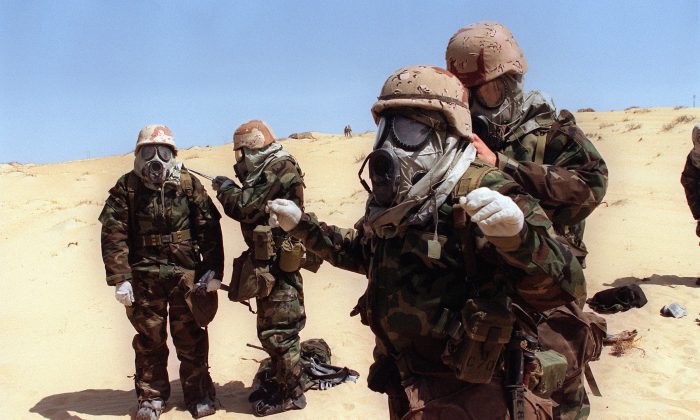 U.S. soldiers from the 4th Regiment of Marines help each other to dress full anti-chemical equipments on Aug. 23, 1990, during a training operation in the Saudi desert a few days after the Iraqi army entered the Kuwait. (Gerard Fouet/AFP/Getty Images)
US

In the 1990s, long after Vietnam veterans returned home with serious medical problems they attributed to Agent Orange; Americans thought we were past this kind of chemical exposure for troops. That was until Persian Gulf War veterans started to experience their own disastrous medical affects. A university study found new information about chemical exposure in the first Gulf War.

Known as the Gulf War Illness (GWI), this chronic health condition affects approximately one-quarter of military veterans who fought in the Gulf War. For years GWI stumped doctors and medical scientists. Neither a specific cause nor proper diagnosis could be given for many veterans. Now GWI appears to be the result of several factors.

The term “Gulf War Illness” was given to soldiers who suffered a complex range of symptoms that could not be explained through common laboratory tests. Soldiers who have GWI may show any combination of: chronic headaches, widespread pain, memory and/or concentration difficulties, unexplained fatigue, digestive, and other abnormalities. Few GWI patients have recovered since 1991.

The Baylor University study was funded by the Department of Defense and co-authored by Antonio Sastre, Ph.D.; Mary R. Cook, Ph.D., formerly of Midwest Research Institute in Kansas City, Mo.; and Mary M. Gerkovich, Ph.D., of the Department of Biomedical and Health Informatics, at the University of Missouri-Kansas City School of Medicine. The study focused on 304 veterans suffering from GWI and was published Sept. 19 in Environmental Health Perspectives, a medical journal.

Our study results strongly suggest that GWI is the residual effect of exposures encountered by military personnel who served in the 1991 Gulf War.
— Lea Steele, Ph.D., epidemiologist, Baylor University

According to the study, the locations where the vets served seem to be a major contributing factor. It appears that soldiers who fought in forward ground areas of Iraq and Kuwait suffered higher rates of GWI than those who did not.

These soldiers on the front lines of Iraq and Kuwait were given a medication called pyridostigmine bromide (PB) in 1991 to protect them from the affects of nerve gas that could have been used by Saddam Hussein’s forces. Soldiers who took the PB medication were 3.5 times more likely to show signs of GWI than those who did not.

Additionally, personnel who served in support locations away from the nerve gas medication but who still show symptoms of GWI may have been exposed to pesticides misused during the Gulf War.

Soldiers who were near SCUD missiles when they exploded or near smoke from the Kuwaiti oil fires set by Iraqi forces as they were forced out of Kuwait also show higher levels of GWI than those who were not present.

GWI may be the result of several chemical agents, according to the study. Many veterans took the PB medication and were exposed to smoke from the oil fields, which darkened skies and polluted the earth. The U.S. Department of Defense also concluded that about 100,000 troops were exposed to low levels of nerve gas used by Hussein’s Iraqi forces.

“Our study results strongly suggest that GWI is the residual effect of exposures encountered by military personnel who served in the 1991 Gulf War,” said Lea Steele, Ph.D., Baylor University epidemiologist and lead author of the study, in a press release. “Although the specific biological mechanisms are not well understood, we know that a number of the 1991 Gulf War exposures of concern; PB pills, many of the pesticides, and low-level nerve agents affect the same nerve signaling chemical, acetylcholine, which is involved in diverse processes necessary for normal brain and neurological function.” Steele is research professor of Biomedical Studies in the Institute of Biomedical Studies at Baylor.