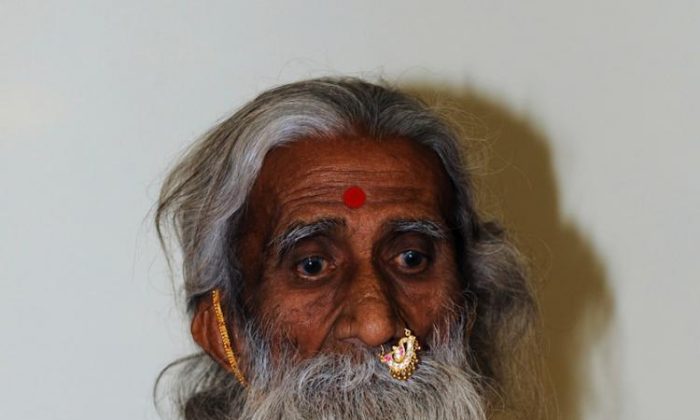 SHOWING THE MIRACLE: Yogi Prahlad Jani takes part in a press conference at a hospital in Ahmedbad on May 6. (Sam Panthaky/Getty Images)
Beyond Science

After 15 days of investigation, India’s Defense Institute of Physiology and Allied Sciences concluded its study of 82-year-old yogi Prahlad Jani on Thursday, May 6.

Jani, who claims to have lived without food or water since his childhood, was under the close watch of three video cameras 24 hours a day. Researchers conducted various medical tests on him. The research team, consisting of 35 scientists, could not find any evidence that Jani ate or drank anything during the 15 days.

Doctors have not found any adverse effects in his body from hunger or dehydration. They think that yoga exercises may have caused Jani’s body to undergo a biological transformation. The researchers said tests found that his brain is equivalent to that of a 25-year-old.

In fact, the doctors said that after fasting for two weeks, Jani was healthier than the average 40-year-old, the Daily Mail reports.

When a person fasts, there are usually changes in metabolism, but that was not observed in Jani.

“Clinical, biochemical, radiological, and other relevant examinations were done on Prahlad Jani and all reports were within the safe range throughout the study. He is healthy; his mind is sharp,” said researcher Dr. G. Ilavazhagn according to the Daily Mail. “What is truly astonishing, and something we have no explanation for, is that he has not passed stools or urine. To my knowledge, that is medically unprecedented.”

Scientists will continue to analyze the results from this study, and it may take two months for them to draw conclusions.