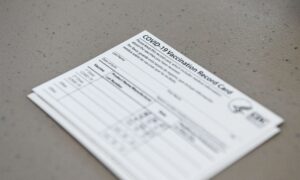 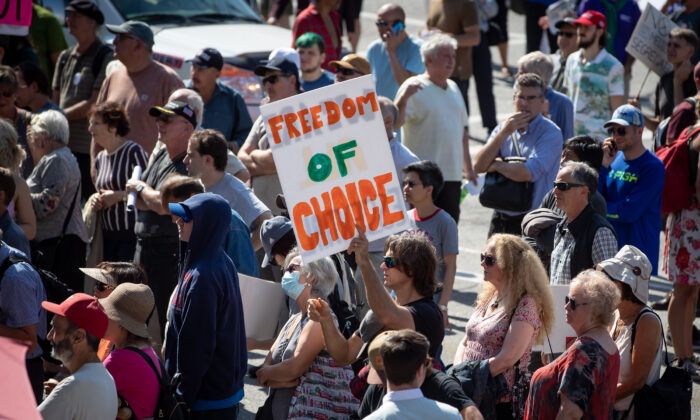 People listen to a speaker during a rally and march organized by those opposed to COVID-19 vaccination passports and public health measures, in Vancouver, on Sept. 8, 2021. (The Canadian Press/Darryl Dyck)
Vaccines & Safety

You’ve been through the worst of the pandemic together, but things just aren’t the same anymore. Can you still be friends?

According to a survey by public relations/marketing agency OnePoll, the answer is often no when it comes to friends who refuse to get the COVID-19 shot.

The survey of 1,000 Americans, conducted on Sept. 2, found that 16 percent of respondents had “axed three pals from their lives” since the pandemic began in March 2020.

“Of those who ended a friendship, 66 percent are vaccinated and 17 percent don’t ever plan to receive the shot,” according to OnePoll. “Fourteen percent of vaccinated respondents said they parted ways with friends who didn’t want to get inoculated.”

However, it wasn’t just the unvaccinated who were getting the cold shoulder from their erstwhile vaccinated friends, the survey found.

Having different political views (16 percent) was another reason for ending a friendship, followed by dating or sleeping with an ex partner (15 percent), spreading false information about a friend (12 percent), and lying (7 percent).

“A vast majority of vaccinated people [97 percent] consider their ex-friends to be ‘full-blown anti-vaxxers’ and said they could never get them to understand the importance of the vaccine,” OnePoll said on their website.

“Those respondents shared why their former friends didn’t want to get vaccinated—from not believing in vaccines to claiming the COVID-19 vaccine doesn’t work.”

The study found that many of the vaccinated respondents considered their decision a personal choice based on their concerns about adverse effects.

“Others said they’re healthy and don’t need the vaccine, while some expressed distrust,” OnePoll found.

Finally, 61 percent of vaccinated people feel “very confident” that they were correct to get the shot, compared with 33 percent who feel the same about not getting it.

The study found that the U.S. Centers for Disease Control was the top source of information for people interested in learning more about COVID-19 vaccines.

While losing a friend over one’s vaccination status can be a strange, sad affair, many marriages are also under strain.

“Many people are feeling hesitant about the COVID-19 vaccines for many reasons, which can create a difficult space for couples to navigate,” said New York divorce lawyer Lois Brenner in her Aug. 4 blog.

“Differing thoughts on whether to get the vaccine can also come as a surprise,” Brenner said.