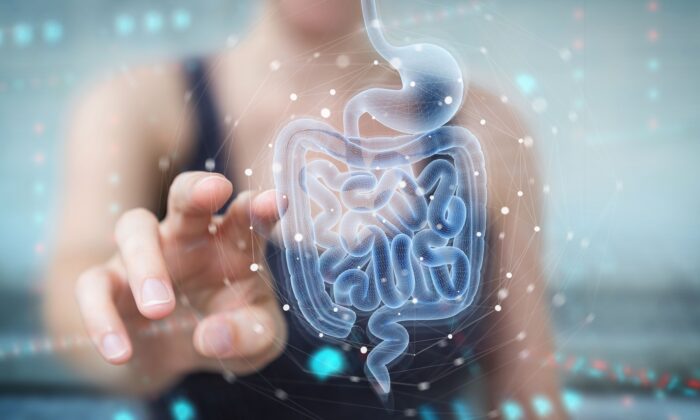 Our immune system works in concert with an ecosystem of microbes living inside of us. (sdecoret/Shutterstock)
Australia

Study Finds That Immunity Is Related to Gut Health and Diet

Researchers from the University of Sydney have said that the results of a pre-clinical study conducted by the university have enhanced understanding of diet’s effect on immunity and gut health.

The Sydney University study found that high-protein diets can trigger an immune response by altering the composition and activity of the gut microbiota—a collection of microorganisms that live in the gut.

Associate Prof. Laurence Macia from the Charles Perkins Centre and Faculty of Medicine and Health at Sydney University said in a news release that the team focused on the relationship between gut microbiota and immunity.

“The focus of our work is on how the gut microbiota–the trillions of bacteria that inhabit the gut–affects the immune system,” Macia said.

“Our ultimate aim is to understand how we can manipulate the bacteria to optimize health, and we know that one of the easiest ways to change the microbiota is to change the diet.”

Traditionally, scientists have focused on the role of dietary fibre when investigating the maintenance of a healthy gut.

In an email to The Epoch Times, Macia said this was because dietary fibres are not digestible by humans and, therefore, whilst intact, reach the colon, which has the highest quantity of bacteria.

“Dietary fibres are thus the main source of energy for the bacteria, while other diet components are used by the host,” Macia said.

Macia said that altering the amount of dietary fibre in a person’s diet dramatically impacts gut health; it is easier to investigate.

This study explored the effect of 10 different diets, each of which had a different makeup of macronutrients —proteins, fats, and carbohydrates—on mice using sophisticated modelling.

The researchers found that when mice were fed a high-protein diet, their production of bacterial extracellular vesicles— carriers of complex cargo that contains bacterial information such as DNA and proteins— increased.

“We identified that high protein increased the production of some metabolites, which may be due to the direct utilization of proteins by the bacteria,” said Macia.

The increase in bacterial extracellular vesicles was interpreted as an attack by the body, which triggered a sequence of events where immune cells travelled into the gut wall.

“Here we found protein had a huge impact on the gut microbiota, and it was not so much about the type of bacteria that were there, but the type of activity,” said Macia.

“In essence, we discovered a new way of communication between the gut bacteria and the host which was mediated by protein.”

Macia noted that as the results have yet to be validated in humans, the researchers are yet to find out if the immune response observed in the trial is either good or bad for humans.

Lead author and post-doctoral researcher Jian Tan said that researchers are aware that an increase in the gut antibodies —proteins that neutralize foreign germs in the body— generates a stronger level of protection against pathogens, such as salmonella. However, there is also evidence to show that an activated immune system could increase the risk of developing inflammatory bowel disease—a collection of conditions where some or all of the digestive tract is chronically inflamed.

A point the researchers noted is currently observable from modern-day diets since in the Western world, rates of gastrointestinal infections have lowered, while rates of chronic diseases have increased.

Unique Modelling System That Made The Discovery Possible

The study used a geometric framework designed by the Academic Director of the Charles Perkins Centre, Prof. Stephen Simpson, and Prof. David Raubenheimer in 2016, which is useful in the face of modern diets where there is an overabundance of food and overindulgence of food containing specific blends of nutrients.

Other frameworks observe the effect that individual components of a diet have on the body rather than looking into the effect that different diets, involving multiple components with varying blends of nutrients, have on a person.

“Our framework throws down the gauntlet to the whole field of human nutrition,” said Simpson in a Sydney University news release.

“It shows that the prevailing focus on single nutrients is not able to help us understand complex chronic diseases and that an approach based on nutrient balance can help solve the problem.”

Simpson said that using the “nutritional geometry” framework allows researchers to observe patterns that would have otherwise been missed. The framework permits food, diets, meals and dietary patterns to be plotted together based on nutrient consumption, assisting researchers in detecting patterns in the links between diets, health and disease.

“Nutritional geometry’ considers how mixtures of nutrients and other dietary components influence health and disease, rather than focusing on any one nutrient in isolation.”

“Conventional thinking which demonizes fat, carbohydrate or sugar in isolation as causes of the obesity crisis—dubbed the single nutrient approach—has now run its course.”

“This is the first time this model has been applied in immunology, and it could only have happened here at the Charles Perkins Centre. We are excited about what could come next,” Assoc. Prof. Macia said.