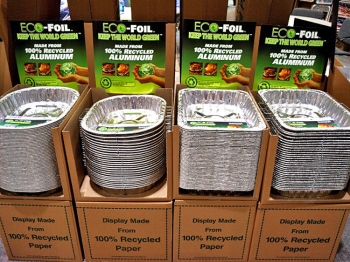 Many companies have made a corporate initiative to incorporate remanufacturing and being green into their corporate marketing and development. (Mira Oberman/AFP/Getty Images)
US

Steve Gigliotti
View profile
Follow
biggersmaller
Print
BOSTON—For many people, it seems like the best choice; buying a remanufactured, recycled product should be better for the environment. A report from MIT shows that sometimes buying a remanufactured recycled product is not better for the environment, and in some cases sometimes it may be worse.

In a recent study by professor Timothy Gutowski of MIT’s Mechanical Engineering Department, his team found that in half of 25 cases studied, the cost of energy was greater to produce the remanufactured product than to produce a new product.

Their study was recently published in the Environmental Science & Technology. Gutowski and his team describe remanufactured products as, “what appears to be a simple, straightforward problem and shows that the world is a far more complicated place than people thought.”

Good products to buy new, are those that as technology improves, so does the energy efficiently of the item. Examples include appliances like refrigerators and washing machines. What often turns out to be the case, Gutowski said in an MIT press release, is that, “new technology shows up that is so much more efficient, from an energy point of view, that you should get rid of the old device” rather than having it fixed or buying a remanufactured version.

For companies, the decision to remanufacture or not comes down to cost. For example, Gutowski and his team gave an example of an electric engine core being cheaper to manufacture, but not as efficient, thus less green as a finished product.

Many companies have made a corporate initiative to incorporate remanufacturing and being green into their corporate marketing and development. Cisco, for example, since 2001 has according to their website, provided 28,000 customers in 80 countries with Cisco certified refurbished equipment in cases where deploying new Cisco equipment is not an option.

“You think you’re doing the right thing, it sounds so simple,” Gutowski says. But when it comes to understanding the true impact of purchasing decisions on energy use, “things are far more complicated than we expect.”