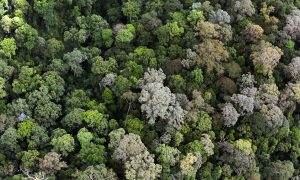 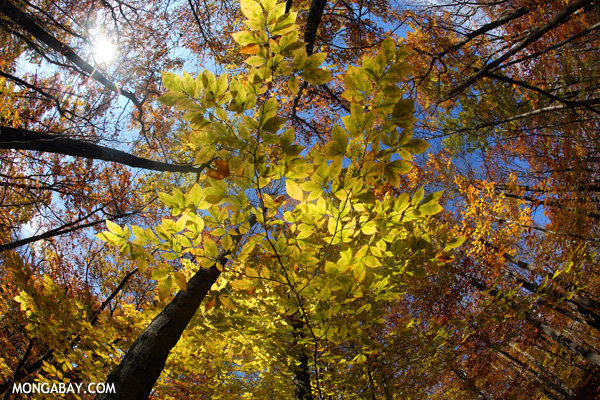 Soil plays a big role in the global carbon cycle, but how much or how quickly forest soil carbon pools decline after logging is poorly understood. This may have serious implications for how carbon emissions from deforestation are accounted for. The U.S. Forest Service, for example, currently operates under the assumption that forest soil carbon pools don’t change whatsoever after logging.

According to a study by researchers with Dartmouth College that was published in the journal Global Change Biology Bioenergy last September, however, the carbon stored in mineral soils, which lie underneath the organic soil layer, is released for decades after a forest is cut down.

The study’s lead author, Dartmouth doctoral candidate Chelsea Petrenko, was inspired by the previous work of her co-author, environmental studies professor Andrew Friedland, which showed that the greater disturbance to a forest, the lower the soil carbon pool would be. “That study led us to ask: does soil carbon storage not only vary with disturbance intensity but also with time after disturbance?” Petrenko told mongabay.com.

So she and Friedland took mineral soil cores from 20 forests in seven different regions across the northeastern U.S. and compared the amounts of carbon present in samples from forests logged 5, 25, 50, 75 and 100 years ago. They found no substantial difference between soil carbon pools in newly cleared forests versus those that had regrown to maturity. But they did find an inverse relationship between the time since a forest was cut down and the amount of carbon still stored in its mineral soil.

“It is not surprising that forest clearing affects below-ground processes given what we know about ecosystem biogeochemistry,” Petrenko said. “When a forest is cleared, the aboveground biomass, which would have become part of the soil eventually, is removed from the system. That is a considerable amount of carbon and nutrients to remove, and eventually the signal from that disturbance will be measurable in the soil.”

The researchers chose to center their study in the northeastern U.S. for good reason: it is a region that has experienced “intense logging” for the past four centuries, according to studies. Most primary forest in the area is now gone, but logging pressures still continue, with Global Forest Watch data showing nearly a million hectares of tree cover were lost from an area of the U.S. spanning Pennsylvania to Maine from just 2001 through 2012, totaling about two percent of the region’s tree cover. It should be noted that this data also includes tree plantation harvesting, so may not entirely represent deforestation.

The repercussions of logging are many and varied, according to researchers.

“The removal of biomass is just one example of the effect of the harvesting disturbance, as there are critical changes to hydrology and temperature that also affect the cycling of elements in the ecosystem,” Petrenko said.

Soils account for as much as 50 percent of the carbon stored in forest ecosystems, according to the study. But they are not currently factored into most climate models “due to the difficulty in collecting samples from the rocky, difficult terrain,” the Dartmouth researchers said in a press release.

Petrenko said that her research shows soil carbon pools absolutely must be considered by such models, but that further study is still necessary before that is feasible.

“Our study suggests that soil should be included in land-use change models,” she said. “However, since soil is so variable and difficult to measure, we don’t have enough information yet to give a specific recommendation on how much soil carbon would be lost from a specific landscape after harvesting.”

Past studies on the topic have produced varied results, Petrenko said, leading her to the conclusion that some soils might be more susceptible to carbon loss after logging than others. “We will continue to work on this topic until we understand the mechanisms underlying observed changes and can more accurately predict changes to soil biogeochemistry after forest harvest.”

Their aim is to get to a point where there is enough data that soil carbon pools can be included in climate models as well as accounted for by agencies like the U.S. Forest Service when contemplating land use changes.

“Ideally, we could give a specific number and say, ‘if you cut down a forest, you can expect to lose X amount of carbon from the soil,'” Petrenko said. “However, soils are extremely variable on local and regional scales, and we have just begun to measure changes in them with the harvesting disturbance. This is especially true for deeper soils.