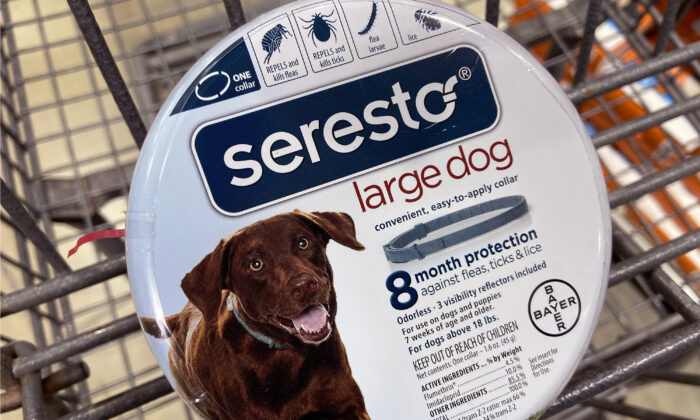 Seresto pet collars are offered for sale at a retail store in Chicago, Illinois, on March 3, 2021. (Scott Olson/Getty Images)
Companies

The use of Seresto flea and tick collars was linked to the deaths of thousands of pets, according to findings in a recent report from the House of Representatives Committee on Oversight and Reform’s Subcommittee on Economic and Consumer Policy.

Seresto collar, launched in 2013, offered eight months of flea and tick protection for dogs and cats for under $70. This attracted considerable interest from pet owners, with almost 34 million Seresto collars sold in the United States by Bayer Animal Health, the original owner and manufacturer of the collar, and Elanco Animal Health, the company which bought Bayer in 2020.

According to the report published June 15 (pdf), the Seresto collar was linked to more than 75,000 incidents involving “unexpected effects from the use of a pesticide” and 1,700 pet deaths, based on a March 2021 report from USA Today. The reported numbers have since increased to “more than 98,000 incidents and 2,500 pet deaths.”

The report blamed the U.S. Environmental Protection Agency (EPA) for failing to take action against the collar despite being aware of the dangers posed by the product for several years.

In 2016, an EPA risk manager wrote that the agency had “rushed” the registration of Seresto’s collar so that the U.S. Centers for Disease Control and Prevention (CDC) could use the product in one of their studies.

In March 2021, USA Today published an investigative report detailing the dangers posed by the collar. Following the report, a scientist from the EPA said that the substance of the agency’s response would depend on “if you want the real answer or some talking points to cover our ass for doing nothing.”

Another official from the agency said that they hoped “someone can blow the lid off this travesty” this time, the report states.

“EPA should initiate a Notice of Intent to Cancel proceedings, which will ensure that a comprehensive review of Seresto and its risks is undertaken. In the meantime, to protect pets from further harm, Elanco should institute a voluntary recall of the Seresto collar until comprehensive safety testing can be completed,” the report recommends.

The report also calls for the EPA to strengthen its scientific review process as well as improve incident data collection so as to “better understand” risks posed by pet products that come under its regulatory authority.

The Epoch Times has reached out to the agency and Elanco Animal Health.

The subcommittee report was released Thursday just before a hearing held on the same day, with testimony from several people whose pets had died.

Thomas Maiorino, a pet owner, claimed that his veterinarian could not diagnose his dog despite several visits and multiple medications. This might suggest that symptoms caused by the collar are difficult to detect, meaning the real number of pets affected by the product could potentially be higher.

During the hearing, Jeffrey Simmons, chief executive of Elanco Animal Health, based in Greenfield, Indiana, called the risks posed by the collar “reasonable.”