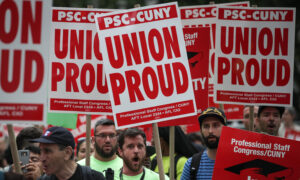 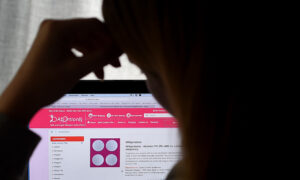 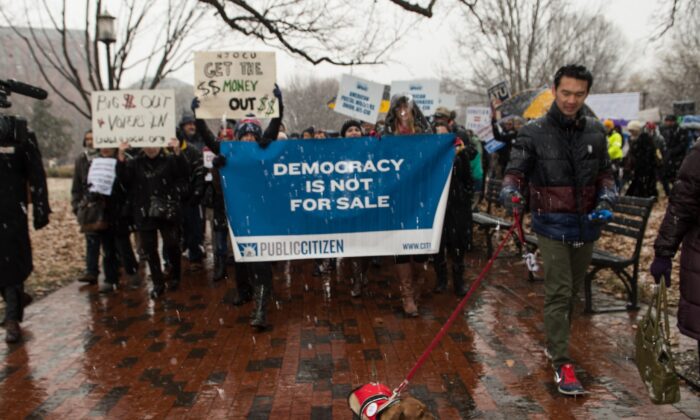 Demonstrators march in the snow through Lafayette Park, outside the White House, during a rally against the Supreme Court's 2010 decision in favor of Citizens United, which allows private citizens and corporations to make unlimited donations for political campaigns, on Jan. 21, 2015. (NICHOLAS KAMM/AFP via Getty Images)
Politics

Public corruption prosecutions have declined since the Supreme Court’s Citizens United decision, according to a new study by the Institute for Free Speech. Campaign finance reformers had predicted that decision would unleash a flood of special-interest influence-peddling in government.

The ruling reversed one of the major tenets of the Bipartisan Campaign Finance Reform Act of 2002 that was intended to “take money out of politics.”

In response to the 2010 decision, President Barack Obama declared that the court had given “a green light to a new stampede of special-interest money in our politics.”

Similarly, then-MSNBC political analyst Keith Olberman claimed the decision meant “the entirely bought-and-sold politicians can now change any law, and any legal defense you can structure can be undone by the politicians who will be bought and sold into office in November.”

“A comparison of public officials charged with corruption offenses by the U.S. Department of Justice nine years before and nine years after the High Court’s decision shows a decline rather than an increase in corruption,” the Institute for Free Speech’s Alex Greven said in the report, which was made public on Sept. 3.

“Further, states that were most affected by Citizens United saw a larger decrease in corruption than states unaffected by the decision,” Greven wrote.

At first glance, the huge increase would seem to confirm the dire predictions of Obama and other critics of the court’s decision.

“If those who argued Citizens United would usher in a new era of corruption were correct, this increase in independent expenditures would correspond with an increase in public corruption,” Greven wrote.

“In contrast to what one would expect if Citizens United truly unleashed a tidal wave of political corruption, the data show that, after peaking in 2008, there has been a relatively steady decline in corruption prosecutions over time. Citizens United appeared to have no impact on this trend.”

The same lack of impact was reflected in the 24 states that the National Association of State Legislatures said were most affected by the decision, according to Greven.

A spokesman for Issue One, an organization that advocates for stronger campaign finance laws and favors reversal of the decision, didn’t immediately respond to a request by The Epoch Times for comment on Greven’s analysis.

And numerous groups, including Public Citizen and End Citizens United, have proposed legislative and constitutional remedies to reverse the decision.

“Donald Trump is the most corrupt president in modern history, and he has spent his presidency enriching himself, his family, and corporate special interests,” End Citizens United President Tiffany Muller told The Hill after her organization endorsed Biden in April.

Muller didn’t provide any evidence for her condemnation of Trump.

“Joe Biden has spent his career fighting to make sure our democracy includes everyone, and I know he’ll work to get big money out of our politics and more Americans participating in our democracy,” Muller said.