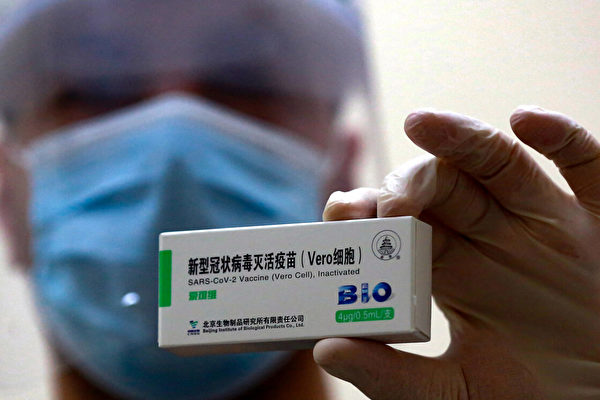 A study showed that after two doses of a vaccine produced by Sinopharm, neutralizing antibodies against Omicron variants were barely detectable. (Khalil Mazraawi/AFP via Getty Images)
China

Recent medical studies showed that the COVID-19 vaccines manufactured in China by Sinopharm and Sinovac Biotech lack the ability to cause production of sufficient neutralizing antibodies to combat the rapid spread of Omicron variants of the virus. Neutralizing antibodies bind to a pathogen and block it from causing infection. The level of antibodies produced is one of the primary indicators of a vaccine’s efficacy.

Currently, the two most used vaccines in China are Sinopharm’s BBIBP-CorV vaccine and Sinovac Biotech’s CoronaVac vaccine. Despite their shortcomings, both vaccines are not only in use across China but are exported to multiple countries.

The June 20 issue of The Lancet Infectious Diseases journal included a report on the efficacy of Sinopharm’s BBIBO-CorV vaccine. Led by 10 Chinese medical experts, the report tracked the health of 25 subjects and the levels of antibodies they produced, after receiving the vaccine. Ideally, the vaccine would cause production of sufficient antibodies to help neutralize subtypes of Omicron BA.2.12.1 and BA.4/BA.5.

After two doses of Sinopharm’s vaccine were administered, the researchers found the neutralizing antibodies were “undetectable or minimally detectable” in the recipient’s blood. After a booster shot, less than half (ranging from 24 to 48 percent) of the 25 subjects had antibodies to the Omicron subtype variants.

On January 20, Nature Medicine journal published a report comparing the efficacy of Sinovac Biotech’s CoronaVac vaccine and Pfizer Biotech’s mRNA Comirnaty vaccine. Co-authored by researchers from Yale University and the Dominican Republic, the report found CoronaVac alone did not help against the rapid spread of the Omicron variants.

Last December, medical researchers from Shanghai’s Jiao Tong University and a Shanghai-based laboratory specializing in respiratory infectious diseases, examined the efficacy of Sinopharm’s BBIBP-CorV booster against Omicron versus an older coronavirus strain from Wuhan. The booster’s neutralizing antibodies activity against Omicron dropped by 20.1 times compared to its activity against the older Wuhan strain.

The study analyzed samples from 292 health care workers who received a third CoronaVac booster 8 to 9 months after receiving their second dose.

Herd immunity occurs when a large proportion of a population is immune to a disease either through immunization or post infection, which helps prevent the spread of the disease to others who are more vulnerable. Thus, it is important for the administered vaccines to have a high rate of efficacy.

As of June 20, the Chinese Central Government’s official web portal claims that 3.4 billion doses of vaccines have been administered to a population of 1.4 billion. No other country has this same vaccination rate, suggesting China may have theoretically achieved herd immunity.

According to the World Health Organization (WHO), only 57 countries have achieved a 70 percent vaccination rate. Although China says it has achieved widespread immunization, the Chinese Communist Party (CCP) still insists on maintaining its harsh zero-Covid policy.