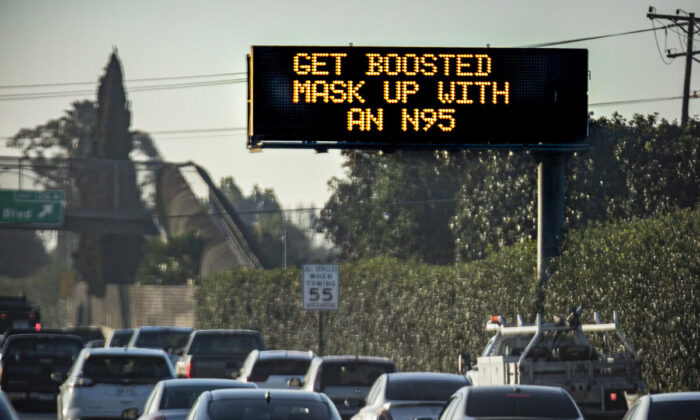 When COVID-19 hit two years ago, how many times did we hear California politicians say we must “follow the science”? Instead, they followed the politics. That’s what’s indicated in a study by the National Bureau of Economic Research: “A Final Report Card on the States’ Response to COVID-19.” The study was reviewed by noted Stanford professor of medicine Jay Bhattacharya.

It comes as America finally is moving beyond the pandemic and returning to normalcy, or at least trying to. Reported The Epoch Times this week, “Federal Judge Strikes Down CDC Mask Mandate for Planes, Travel.”

The study, by economists Phil Kerpen, et al., noted America’s federalist model allowed the states to adopt different responses: “States learned from one another over time about what policies worked most and least effectively in terms of containing the virus while minimizing the negative effects of lockdown strategies on businesses and children.”

The study looked at three areas: the economy, education and mortality. America’s 50 states are highly diverse. The changes in these areas can be compared.

The combined score of all three factors showed: “The outcomes in NJ, NY, and CA were among the worst in all three categories: mortality, economy and schooling. UT, NE, and VT were leaders in all three categories. The scores have a clear spatial pattern, perhaps reflecting spatial correlations in demographic, economic, and political variables. However, IL, NM, CO, and CA are outliers among their geographic neighbors in the direction of low combined scores. FL, AR, WV, and UT are outliers in the other direction.”

That means California did not do well. The daily updates by Gov. Gavin Newsom, excessive masking, lockdowns of businesses, and the long-shuttered schools only hurt our state.

Here’s their map of the states, with darker blue having a better performance, lighter worse:

It looks like in California, the cure was worse than the disease.

Unemployment in California increased by 5.1 percentage points, 47th worst. The best was Montana, at a loss of just 0.9 points.

Education was of special concern to parents and students. The study wrote, “The OECD estimates that learning losses from pandemic era school closures could cause a 3 percent decline in lifetime earnings, and that a loss of just one third of a year of learning has a long-term economic impact of $14 trillion. Unlike mortality or economic outcomes, closing public schools was entirely under the control of policymakers. Almost all private schools were open.”

Tracking company Burbio tallied the cumulative share of “in-person instruction,” when the kids were in the classroom. Wyoming was the best, with 100 percent of kids in school during the pandemic. That was followed by Arkansas at 96.8 percent, and Florida at 96.2 percent.

Last among the states was California at 19.2 percent at their desks, followed by Oregon at 20.2 percent. Golden State kids were in the classroom just one of five days. This is shocking, and will harm California’s young people, and the economy, for years and decades to come. As you may recall, the state’s teachers’ unions were most insistent on keeping the kids at home and out of the classroom.

“Whether or not political leaders can be considered responsible for mortality outcomes is therefore unclear, although advocates of a ‘focused protection’ strategy have suggested that sheltering the high-risk could reduce overall mortality – an approach adopted by Florida. Because COVID infection mortality risk is extremely age-related – 8,700 times higher in age 85+ than in 5 to 17 [age group], according to the CDC – we applied an age-adjustment to the number of observed deaths in each age group to bring the numbers in line with a standard U.S. population.”

Two diseases strongly correlated with deaths. “The estimated coefficients on obesity and diabetes prevalence were both positive, although the diabetes coefficient was almost triple the obesity coefficient.”

California’s relatively more healthy population protected it from greater deaths. And maybe the CDC should have emphasized getting people in shape and losing weight by doing more walking and other exercises, instead of keeping people locked up inside binge-watching Netflix.

A personal note. One of my favorite restaurants was the Katella Grill in Anaheim. They had the best liver and onions in Orange County. I went there on April 11 and they were closed. A sign on the door said April 10 was their last day. It said they tried to stay open after the COVID ordeal, but couldn’t make it.

I remember at the beginning of the pandemic, the Grill was shut down entirely. Then it opened a few months later with outdoor dining in their parking lot, which I liked. When they eventually moved back indoors, it was for breakfast and lunch only, no dinner. Now it’s gone. Another casualty to the incompetence and fanaticism of the governor and the others who run this state.

As the study reviewed here proved, the excesses were unnecessary.