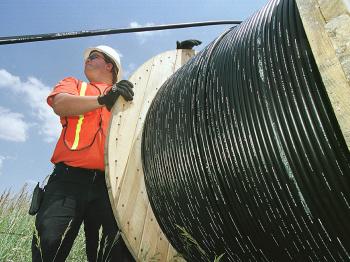 Paul Darin
View profile
Follow
biggersmaller
Print
While Americans spend an increasing amount of time online, our networks may not be big enough to support the growing trend.

The Federal Communications Commission (FCC) is currently developing a National Broadband Plan to deal with the discrepancy. The FCC has been studying the broadband strategies of countries all over the world to see how the U.S. could best distribute this technology here.

Using Internet traffic data from Cisco's Visual Networking Index, the study finds that in 2009 that the U.S. consumes more bandwidth per user than Germany, Italy, the U.K. or Japan. Meanwhile, Japan is equipped with a system of fiber optic lines that can support heavy online traffic.

In some examples, a government pays to install a large network, but people and service providers don’t take advantage of the infrastructure.

In the U.S., the infrastructure may not be as large, but people and service providers are more attuned to consumer usage. As the FCC plans for network expansion in an effort to provide a larger population easier access to the Internet, these findings may make for more efficient use of resources to meet this goal.

The first of the recommendations and a key piece of the plan is expansion of broadband in poor and rural areas. This also includes expansion of wireless networks throughout these areas, and the country at large. The FCC is also looking into unlicensed and underused frequencies which could be harnessed to expand broadband service.

The FCC is due to submit the final conditions of the plan to congress in February 2010.