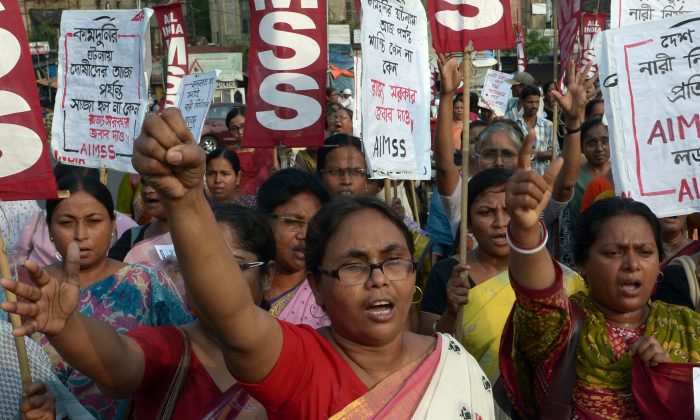 Indian activists from the Social Unity Center of India (SUCI) shout slogans against the state government in protest against the gang-rape and murder of two girls in the district of Badaun in the northern state of Uttar Pradesh and recent rapes in the eastern state of West Bengal, in Kolkata on June 7, 2014. (Dibyangshu Sarkar/AFP/Getty Images)
Asia & Pacific

Four out of five women in India suffer from public harassment, said a survey by ActionAid UK.

Over 500 women were polled in cities across the country including New Delhi, Mumbai, Bangalore, Chennai, and Kolkata.

The study found 84 percent of respondents reported having experienced harassment. The respondents’ ages ranged from 25 to 35 years old, most of them working women and students, according to the Thomson Reuters Foundation.

“For us in India the findings are not big news, what is noteworthy of the 500 women interviewed in India, is the extent to which women have responded and reported boldly about facing harassment and violence,” said Sandeep Chachra, ActionAid India’s executive director.

“It is as if society is telling women that public spaces are not for them, and what is more interesting is that women are asserting their claim of these spaces,” he said.

Women in India, a country driven by deep-rooted views of women being inferior to men, face injustices ranging from child marriage, dowry killings, human trafficking, rape, and domestic violence, according to the Thomson Reuters Foundation.

Last year, there were 337,992 reports of violence against women, up 9 percent from 2014, according to India’s National Crime Records Bureau.

The new study by ActionAid said women were harassed in various places, including the street, parks, at community events, on college campuses, and while traveling on public transportation.

More than a third of females in the study said they had been groped in public or faced someone exposing themselves. Over half of them reported being followed.

ActionAid urged officials to work towards ending a “culture of harassment.”

“Safety of women is directly related to patriarchal mindsets that manifests itself in streets, homes and workplaces,” said Sehjo Singh, from ActionAid India.

“The fear of harassment and violence has a crippling effect on women’s abilities and potential, and in itself it is an attack on women’s rights,” said Singh.

India received worldwide attention when a young woman died after being gang-raped on a bus in Delhi in 2012.