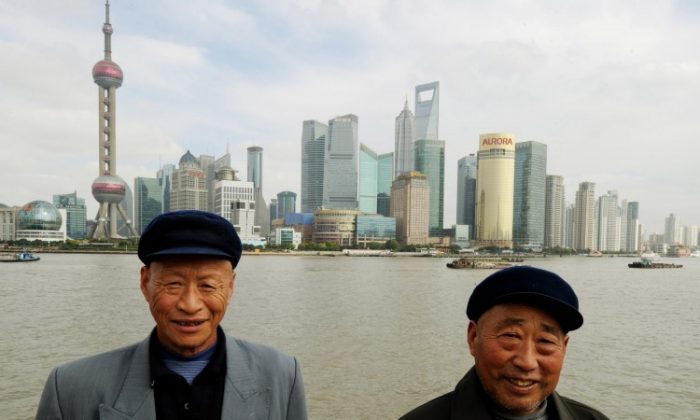 Two Chinese farmers from Henan Province pose for photos in front of the Pudong Financial district skyline from the historic Bund in Shanghai on Oct. 31, 2011. The income gap in China is close to the UN’s warning level for social unrest, according to a recent survey. (Mark Ralston/AFP/Getty Images)
China

The Gini coefficient (also known as the Gini index), an index that measures inequality, designates zero for perfect equality and one for maximum inequality. The UN estimates that a Gini coefficient of 0.4 and above may lead to social unrest.

The Chinese regime releases separate statistics for urban and rural regions rather than an overall Gini index for the country. The enormous disparity in income distribution revealed in a series of studies may explain why.

The income gap is close to the UN’s warning level for social unrest, according to a recent survey by Central China Normal University’s Center for China Rural Studies.

The results showed a significant income difference in a sample of farmers’ households. The top 20 percent made about 10 times more money than the bottom 20 percent. In addition, households with migrant workers were found to have higher incomes than households that only labored in the countryside.

The survey also noted that education and medical expenses take up most of the average farmer’s total income. Despite free compulsory education, farmers’ expenses for school fees are roughly 22 percent of their wages, while medical fees are almost 10 percent.

This enormous disparity may be attributable to the state’s favoritism toward large companies. Further research by Sun showed that workers in monopolistic enterprises make up 8 percent of the country’s total workforce, but their wages, bonuses, allowances, and benefits comprise 55 percent of the state’s total payroll.

In fact, the wealth gap in China has continued to widen since the 1980s. Li Shi, director of Beijing Normal University’s Income Distribution and Poverty Research Center, conducted a long-term survey of income equality. He discovered the difference between the lowest- and highest-paid 10 percent of the population was 7.3 times in 1988, rising to 23 times in 2007.

Migrant workers in nine major cities along the Pearl and Yangtze Rivers made approximately 40 percent of the wages that their urban counterparts made, according to a 2008 report by Economic Information Daily, a finance newspaper run by Xinhua, China’s state news agency.

he Epoch Times publishes in 35 countries and in 19 languages. Subscribe to our e-newsletter.