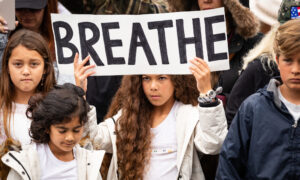 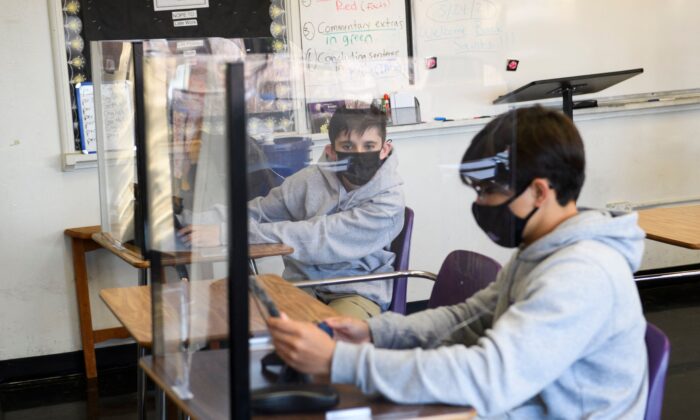 Students sit behind barriers and use tablets during an in-person English class at St. Anthony Catholic High School during the COVID-19 pandemic in Long Beach, Calif., on March 24, 2021. (Patrick T. Fallon/AFP via Getty Images)
Southern California

Students Without Masks Can’t Be Kept Out of Classrooms, Educators Say

Students can’t be banned from school campuses for refusing to wear a mask during the upcoming curricular year, educational leaders say.

“For school districts, we have something in the education code that you used to be able to suspend or send kids home for defiance. If they’re not going to wear the mask, that would ultimately be an act of defiance, and the state doesn’t allow you to send students home for defiance.”

Masks will be required for students and staff at California schools as they reopen for the 2021–22 curricular year, but revised guidance issued by the state on July 12 means local districts will determine how to enforce the mandate if students refuse to comply.

With a return to campus approaching, the San Ardo School District is set to discuss the mandate for students in the next week. While officials will work to comply with the state, Reimer said that since there’s no attempt from the state to enforce the mask mandate in schools, it might be impossible to follow the guidelines.

“We’ve got so much data on this, we can do this and we can manage it,” O’Malley told The Epoch Times. “This state is so diverse geographically and ethnically … there is no one size fits all.”

While his school district has yet to decide on the fate of masks in the fall, O’Malley said he’s hoping for consistency at a state level.

“Dr. Mark Ghaly and Gov. Newsom just can’t seem to make a decision and stick to it,” O’Malley said.

“They did this to us last year. They required plans and we wrote them and then they changed the rules, and we rewrote them … then they did it again and again.”

About 35 miles west of Bakersfield is Buttonwillow Union School District in Kern County, home to about 250 preschool and elementary students. Its supervisor, Stuart Packard, is president of the Small School Districts’ Association.

He said that 64 percent of his school district’s population are English language learners and 94 percent are socioeconomically disadvantaged.

While Packard has received legal advice related to mask compliance, he said his district is waiting for guidelines to fall in favor of small school districts.

“Everything is not San Diego, Los Angeles, and San Francisco,” Packard said. “There’s a lot more to this state, and there’s a lot more approaches to doing things. Small school districts have been just crucial in getting kids back to school; I think we’ve led the state.”

“It becomes a difficulty in teaching young people how to read and how to speak. … When they have speech and language issues, to be able to do that with a mask on is near impossible,” Reimer said.

“They haven’t made a lot of gains academically. It’s been a really difficult year, and the fact that most of my students live in high poverty and are English language learners, it makes the masks even more difficult.”