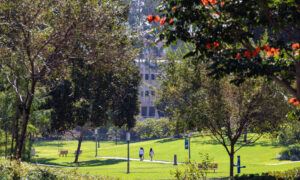 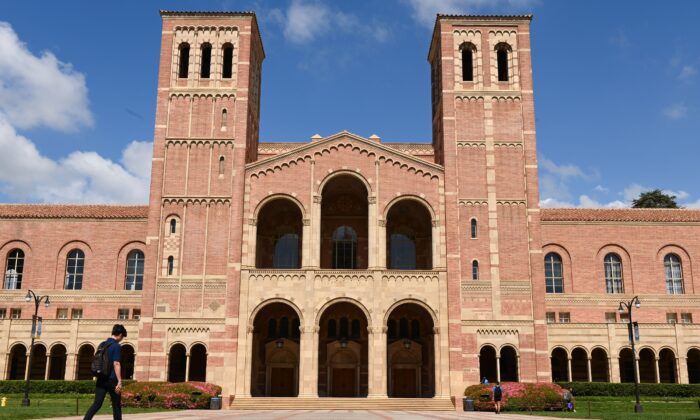 A student walks toward Royce Hall on the campus of University of California–Los Angeles (UCLA) on March 11, 2020. (Robyn Beck/AFP via Getty Images)
Southern California

The Board of Regents of the University of California (UC) recently voted to raise the tuition of students every year for the next five years.

So many of Orange County’s parents would love to see their children attend one of this system’s nine excellent campuses. Our community has been blessed in many ways by having UC–Irvine within its borders.

But rising tuition costs should not come as a surprise.

I served for four years on the Senate’s budget and fiscal review committee’s subcommittee one, which oversees education that the state’s budget funds.

Surprisingly, for all the demands that the state legislature puts on the administrators of the UC system, Sacramento only provides 39 percent of its annual budget. Tuition and fees provide for 43 percent of the UC system’s budget, with 18 percent from various revenue sources, such as dormitory room rentals.

But things get more disturbing when you take a hard look at the annual audited financial statements of the UC system.

For the past five years ending June 30, the fiscal solvency trends, based on the system’s unrestricted net position, are not encouraging.

The major increase in the unrestricted net deficit in 2017 was due to the Governmental Accounting Standards Board requiring that the unfunded actuarial accrued liability for retiree medical, also known as other post-employment benefits (OPEBs), be included on the balance sheet.

Having a deficit double in five years is rather disturbing.

You can quickly see why the Board of Regents would like to have more foreign students, as they pay a much higher tuition. But it bumps out California students who have worked hard to maintain a 4.0 grade point average or higher to be admitted.

Former California governor Jerry Brown convinced former chancellor Janet Napolitano to allow new UC employees to have the option to participate in a defined contribution (DC) plan, like a 401(k), instead of the system’s defined benefit (DB) pension plan. The last time I looked, four out of 10 (37 percent) new hires elected the DC plan. This is good news. But the DB liabilities continue to grow at an astounding rate, with this year’s increase at 20 percent.

Despite this financial hemorrhaging, the Democrats in the State Assembly have tried repeatedly to assist the public employee unions in shutting down the fiscally prudent DC alternative.

Why? The unions are unified in opposing DC pension plans because they shift the investment risk away from the taxpayers and to the employees.

It gets worse. The legislature likes to do the bidding of the unions in obstructing the UC system’s management. I’ll provide one example. Then-Sen. Ricardo Lara ran a bill in 2017, SB 574, that would interfere with the UC system’s hiring of outside contractors.

The administrators of the UC system opposed the bill, which would have virtually eliminated this management tool, warning that “SB 574 significantly undermines the university’s ability to achieve administrative cost savings that could be directed to the University’s core missions of teaching, research, and public service.”

Fortunately, Brown was the adult in the room and vetoed this bill.

With Sacramento only providing 39 percent of the UC system’s revenues, it can make its expenses explode through legislative fiat to satisfy the unions’ demands.

The unions can also strike. This has also been disruptive to the management of the UC system.

Parents, and their children who are hoping to be students at some of the finest universities in the nation, should have their eyes wide open on the reality of rising tuition costs.

The supermajority in the legislature, the governor (who served on the Board of Regents while serving as California’s lieutenant governor), and the public employee unions are in no mood to lower the cost of an education for our high school’s national honor society members.

While serving on the education budget subcommittee, I privately met with the key contact representing the system’s chief financial officer. I let her know that after the County of Orange filed for Chapter 9 bankruptcy protection, we implemented several financial tools such as results-oriented government and annual department business plans that integrated with the county’s 10-year strategic financial plan.

I asked if she could produce a copy of the system’s 10-year strategic financial plan for me. The answer was a firm negative.

There wasn’t one, and there wasn’t going to be one. Why? Because they didn’t want the unions to know the true financial situation or direction of the financial trends.

Well, the trends are lousy.

And our qualified students will be paying the price for the previous fiscal mismanagement of this nine-campus system that has California’s 39.7 million residents indebted to the tune of some $620 each. This glorious university system has to climb out of a very deep fiscal hole, and neither it nor Sacramento has a plan for accomplishing that.

Unless you call increasing tuition every year a plan.