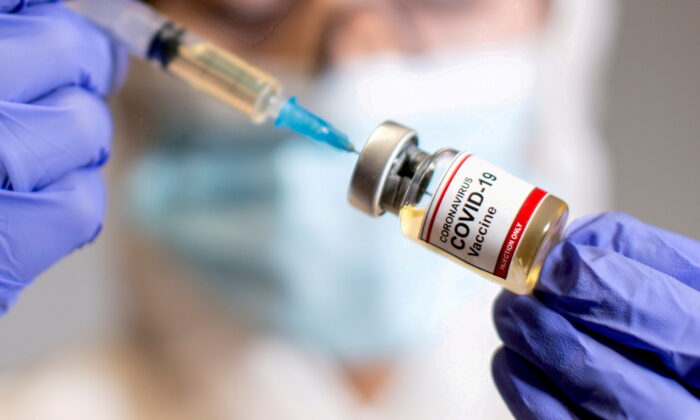 A woman holds a small bottle labelled with a "Coronavirus COVID-19 Vaccine" sticker and a medical syringe in this illustration taken on Oct. 30, 2020. (Dado Ruvic/Reuters)
AMERICA

Eight students from Indiana University (IU) filed a lawsuit in a federal court on Monday against the school’s COVID-19 vaccine mandate, saying the mandate is unconstitutional and violates Indiana’s ban on vaccine passports.

The Bopp Law Firm represented the eight students and sued the board of trustees—the IU’s governing body and legal owner.

“IU’s Mandate violates the constitutional rights of IU’s students—it requires all IU students without any meaningful exemptions to take the COVID vaccine,” lead counsel James Bopp said in a statement, noting that no government entity and no other Indiana public university requires a COVID-19 vaccination.

“This kind of total disregard for student freedom to choose for themselves, for student’s bodily autonomy, and for the need for voluntary and informed consent cannot stand under the U.S. Constitution,” Bopp added.

On May 21, 2021, IU notified all faculty, staff, and students through email that there would be a requirement to receive a COVID-19 vaccine for the fall semester.

Failing to do so will result in students’ class registrations being canceled, their university-issued IDs terminated, and being prohibited from any on-campus activity.

Faculty and staff who do not comply will “no longer be able to be employed” by IU.

According to the lawsuit, one plaintiff, Mr. D.J.B., was refused a medical exemption even though he recently had a COVID-19 antibody test which revealed that he still has antibodies.

Another plaintiff, Jaime Carini, was refused a medical exemption even though her physician provided a letter stating she should not receive any immunization due to her current illness. She received a religious exemption but faces extra requirements of masks and testing.

The lawsuit (pdf) points out that all three available COVID-19 vaccines—Pfizer, Moderna, and Johnson & Johnson—have only “Emergency Use Authorization” status and are not licensed by the Food and Drug Administration (FDA).

A vaccine authorized under Emergency Use Authorization requires “complete, informed, and voluntary consent,” the complaint claims, saying the threat of virtual expulsion from school is “coercion.”

The lawsuit also alleges that college students are at extremely low risk of adverse effects if they get infected. However, the risks and side effects of COVID-19 vaccines are serious and increasingly recognized.

The mandate violates the liberty protected by the Fourteenth Amendment to the U.S. Constitution, including rights of personal autonomy and bodily integrity and the right to reject medical treatment, the lawsuit claims.

Indiana Attorney General Todd Rokita issued an opinion in May (pdf), saying the ban on vaccine passports applies to public colleges and universities because they are “arms of the state.”

IU “unquestionably violates the new law by requiring its students, faculty, and staff to show proof of immunization as a condition of continued attendance or employment,” Rokita wrote in his letter.

But Rokita also said that federal law requires individuals to be informed of the options and consequences but does not explicitly prohibit an entity from mandating a vaccine, even if it is experimental.

In a statement to The Epoch Times, IU’s spokesperson Chuck Carney said IU’s mandate would remain in place “to support a return to safe and more normal operations this fall.”

Bopp also asked for an expedition and sought a preliminary injunction (pdf) to prevent this mandate from taking effect so the eight students can return to school in time.

More than 1,200 cases of heart inflammation in adolescents and young adults following Pfizer’s or Moderna’s COVID vaccine have been reported in the United States, the Centers for Disease Control and Prevention (CDC) said on Wednesday.