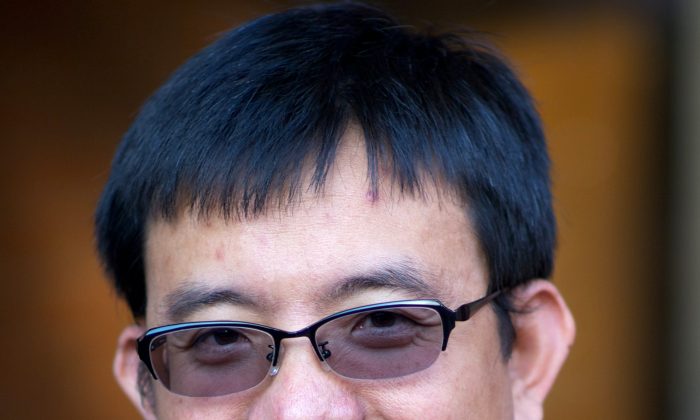 LOS ANGELES—A graduate student arrested on suspicion of killing the professor who oversaw his work at the University of California was described by some of his fellow classmates as a quiet but seemingly normal young man while others say he was troubled and pegged as most likely to quit the group’s rigorous doctoral program.

David Jonathan Brown, a 28-year-old brain and cognitive science student, was arrested on a murder charge in the Friday attack on the Los Angeles campus. His mentor, 50-year-old Bosco Tjan, was stabbed to death inside the building where he runs an intensive lab that studies vision loss.

Brown, one of just five students who worked in the lab, was arrested without incident, police said, adding that the killing was targeted.

Brown was being held on a $1 million bond. It’s unclear if he has an attorney.

Brenton Keller, who told The Associated Press that he and Brown were both fourth-year neuroscience students among a group of about 11, shared a lengthy Facebook post saying he had prayed Brown wasn’t responsible when he first heard news of the stabbing.

“I am sitting here in shock, heart racing and fingers shaking,” Keller wrote in the post, which sometimes directly addressed Brown. “David, you were bright but at the same time troubled … Our whole class knew things were not exactly alright.”

Brown would not always finish his work and would go missing for weeks at a time, Keller wrote in the post.

“It was plain as day that you struggled with things that the rest of us did not, or at least not to the degree that it affected you,” Keller wrote. “Despite how bright you were, we would joke that you were one of the ones most likely to quit, but we never thought you were capable of something like this.”

Another graduate student Katie Zyuzin, replied to the post by saying she also thought first of Brown when she heard the news.

“We saw that he needed help, but how could we offer it to him?” she wrote. “I tried to talk to him (the) last few times that I saw him on campus, but the conversation would not go anywhere, and I started to shrug it off, instead of looking into it.”

Brown had been working in the lab since around 2013 but took a leave of absence for personal reasons last year that lasted roughly a semester, Kwok said. He didn’t know why Brown needed the time off or how close to graduation he was.

“He was a little on the reserved side, but he was nice. He was friendly,” Kwok said from New York, where he’s now in medical school. “There was nothing that ever would have given me some kind of indicator that he would be harboring any kind of sentiment like this.”

Kwok said Tjan treated him as a son and that he always loved the professor’s honesty, good-natured sarcasm and sharp mind.

Chris Purington, project manager at Tjan’s lab, said he last saw Brown the day before the attack, when both he and Tjan attended a PhD student’s dissertation.

“It didn’t seem like anything was wrong. I didn’t see this coming,” Purington said. “When I heard a grad student did it I really expected it to be somebody I didn’t know.”

“Their conversation on research was healthy and constructive,” he said.

Irving Biederman, a neuroscience professor who was Brown’s adviser for a couple months, said he had heard from colleagues that Brown was not doing well in school, though he said he didn’t have first-hand knowledge of the student’s work.

As for Tjan, he said he knew the professor back when he was a student at the University of Minnesota in 1988 and that his death is a huge blow.

“This is the first time I’ve heard of any student having a problem with Bosco; he was universally admired and loved,” Biederman said. “This is almost unfathomable.”

Biederman said Tjan was gentle with students, though he was generous with constructive criticism.

Purington said he never heard of anyone having a problem with Tjan, a married father of one son.

“He was somebody who really cared about people. I know he cared about me,” Purington said through tears.

Tjan joined USC in 2001, taught in the Dornsife College of Letters, Arts and Sciences, and served as co-director of the Dornsife Cognitive Neuroimaging Center.

The stabbing comes six months after a well-loved professor was fatally shot on the nearby UCLA campus. Authorities believe former student Mainak Sarkar killed his estranged wife in a Minneapolis suburb before driving across the country to Los Angeles and fatally shooting engineering professor William Klug and killing himself on June 1. Klug had helped Sarkar earn his engineering Ph.D. in 2013.