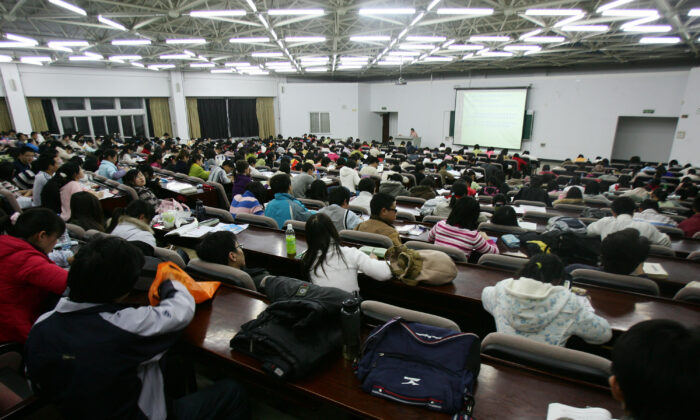 Several provinces in southern China are seeing a wave of mass protests and boycotts after the country’s education authorities announced a campaign to merge “private colleges” with vocational schools.

The southern provinces of Zhejiang, Jiangsu, and Hunan have all experienced pushback on the policy shift, though protests in Shanxi Province are now drawing attention.

Students from the Taiyuan-based Business College of Shanxi University staged campus protests on June 10 after they learned that the title of their school had been changed without notification on the website of China Higher Education Student Information and Career Center (CHESICC), a national agency that shares graduates’ information with HR managers.

Chen Xin (an alias), a sophomore in the college, told The Epoch Times on June 12 that the students felt betrayed by school authorities.

To their surprise, students found their school’s name had been switched to Shanxi Vocational University of Engineering Technology on the CHESICC site, without a stated reason.

According to Chen, school authorities had promised that current students wouldn’t be affected, and would have the same policies in terms of degree or diploma certificates as when they were admitted.

However, Zhao Lei (an alias), a 2015 graduate, revealed to The Epoch Times that student information about graduates of 2017 and beyond has changed, while that of 2016 or earlier remains intact, including the school’s name.

Some students have accessed their accounts on the site and verified this to be the case.

According to Zhao, the name change will impact the future of the colleges’ graduates.

A bachelor’s degree from a vocational school has lower recognition in the job market, he said. Such a person will likely face hidden discrimination if he or she wants to win the position of a public servant or be admitted for a master’s program, which requires such candidates to take additional tests in two subjects.

“Policies and documents are needed to protect students’ interests,” the graduate said. “They shouldn’t become the first victims.”

On June 10, an official document with a red-print title of “The Education Department of Shanxi Province” was posted on the walls of teaching buildings, dining halls, and dorms in the college amid calls for clarification.

The paper reiterated that the site of the student information center would show the original school’s name, diploma, and student status as in general undergraduate programs.

Nonetheless, some students quickly began to question the authenticity of the document, because it’s unavailable on the website of the provincial education authority.

Others raised a concern that it lacks a formal serial number such as “Jiao Fa Han [2020] No. 113,” which suggests the document is invalid and can’t be cited as evidence in legal proceedings if there are any in the future.

Both the interviewees agreed that students can only register under the title of the new school before attending public events.

The seal of their original school has also been revoked, Chen said.

Local authorities have carried out multiple strategies to ban students from protesting.

They provided students with only two channels for raising complaints on the merger: mailboxes in dorm buildings and in the Student Affairs Department.

“Any other channels are unacceptable!” the authorities said. “And any violators would be held accountable and ‘touch the red line of law.'”

However, students who followed their orders were usually summoned for “a talk,” or were threatened that an adverse reference would likely be added to their campus record.

For the time being, students can’t leave the school freely without asking for leave, though they’re legally on the traditional Chinese holiday the Dragon Boat Festival.

Sources say plain-clothed police remain on the campus and police cars on the playground, which school authorities claim are deployed “over concerns of student security.”