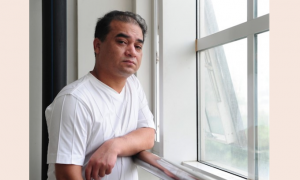 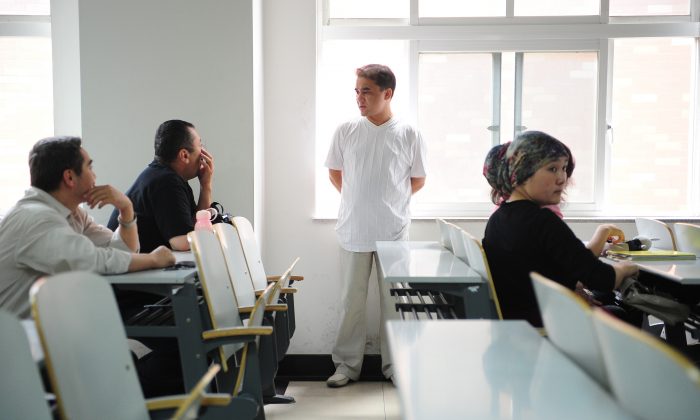 Uyghur professor Ilham Tohti chats with students following his lecture in a classroom in Beijing on June 12, 2010. On Dec. 8, 2014, Seven students of Ilham were sentenced to between three and eight years imprisonment on charges of participating in “secessionist criminal activities.” (Frederic J. Brown/AFP/Getty Images)
China

Seven students of the Minzu University of China in Beijing were sentenced to prison for between three and eight years on Monday for what the Chinese authorities said was their participation in “secessionist criminal activities,” organized by the Uyghur scholar Ilham Tohti.

Ilham, as he is known—Tohti is his father’s name—is a mild mannered scholar whose research and writing explored the sources of discontent toward the Chinese state among the Uyghurs, a Turkic-speaking muslim population native to what is now China’s Xinjiang Province. He is currently serving a life sentence handed down in September, after being charged with inciting secession.

“The court concluded that the students actively participated… constituting an offense of secession,” wrote Liu Xiaoyuan, a well-known rights lawyer who represented Ilham, on Twitter. “Among them, one was sentenced for eight years, two for seven years, one for three years. The other three people’s sentences are unknown, likely to be between three to six years.”

Ilham’s other defence lawyer, Li Fangping, told Sound of Hope Radio that the sentence of the students was completely out of proportion to what they actually did—that is, help him to run a website on Uyghur issues.

“For the students, from our point of view, their actions certainly do not constitute crimes,” Li said. He added that while the punishment of Ilham was a grave injustice, the extremely harsh sentence given the students is “further injustice.”

The seven students all worked on the website Uyghur Online, a forum for discussing Uyghur issues, which was founded by Ilham. The site was shut down by authorities in 2008. They accused it of “inciting secession, ethnic hatred and Xinjiang independence.”

Ilham’s written work and lectures advocated non-violence, and called for more communication and understand among Uyghurs and Han Chinese, the dominant ethnic group.

In his article “My Dream and the Career I Have Chosen,” Ilham said Uyghur Online was meant to provide a platform for rational and moderate voices on Uyghur issues, enhance discussion between Uyghur and Han, and guide society in a better direction.

Dilshat Rexit, a spokesperson for the World Uyghur Congress, said that the sentence of the seven students sent a political message from the authorities that the government’s policies towards Uyghurs would not change.

“The heavy sentence carries political meaning. It is meant to threaten Uyghurs, especially knowledgeable people, including students, not to cross the Chinese Communist Party’s restricted speech zones,” Dilshat said. “The Party worries that more people will use the Internet to express different voices, or to spread truths that the Party wants to cover up.”

On the same day, the Urumqi Intermediate People’s Court also sentenced eight Uyghurs to death for organizing and participating in two terrorist attacks this year. Five other suspects were sentenced to death with reprieve. One attack happened on April 30 at a train station in Urumqi of Xinjiang; the other took place on May 22 at a market in Urumqi. Both were bombing attacks that killed over 40 people.

Communist authorities launched a “special action” against terrorists in May. Hundreds of suspects have since been sentenced and charged with terrorism; dozens of death sentences have been passed down in the last several months.

With reporting by Sound of Hope Radio staff Han Fei and He Wen.