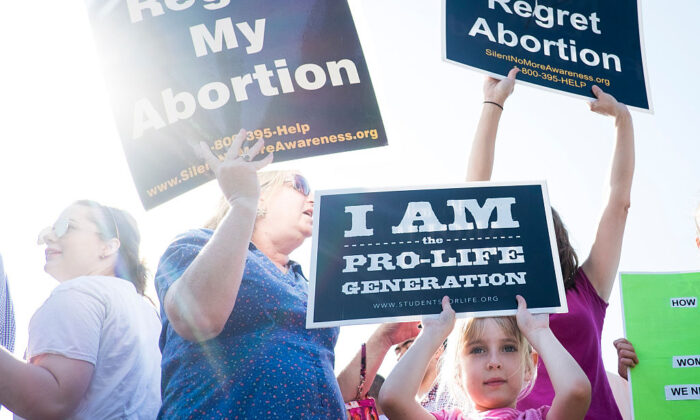 File photo: Pro-life activist, Nora, 6, of Harrisonburg, Va., demonstrates with her family and friends on the steps of the United States Supreme Court on June 27, 2016 in Washington, DC.(Pete Marovich/Getty Images)
US News

An Indiana High School student has filed a discrimination and libel lawsuit against her school for barring her from starting a pro-life club at the school.

The high school freshman, who is a student with the Noblesville School District, located about 27 miles from Indianapolis, alleges the school has infringed upon her First Amendment right to free speech and that it engaged in intimidation and bullying tactics as a way to get her to drop her anti-abortion club proposal.

“The school district cannot prohibit a student group simply because the school administration does not agree with its policy position on important social issues,” said Zac Kester, the student’s attorney, said in a statement.

“Public schools should be eager to support an inclusive environment that showcases a variety of viewpoints. Students shouldn’t have to be afraid of teachers and administrators bullying them for their beliefs.”

The 52-page federal lawsuit was filed in the U.S. District Court of Indiana last week and seeks a permanent injunction against the school from barring the pro-life club.

Lisa and Michael Duell, who are the parents of the student, declined а request for comment from The Epoch Times.

The student named more than a dozen teachers and faculty in the suit and accuses them of harassment and making libelous comments against her on social media.

In criticizing the student’s proposed pro-life club on Facebook, an assistant teacher at the school wrote “there is no place for a club that endorses misogyny, bigotry, and conspiracy-driven politics in our public schools.”

The assistant also posted a question on social media: “So out of curiosity would you be good with club posters in the school for the Black Student Union that said ‘Defund the Police?”

The lawsuit argues that the Noblesville School District has approved without question a number of clubs based on controversial social and political issues. It named, as an example a Black Student Union Group at NHS that has been permitted to hang posters containing the “raised fist” logo associated with Black Lives Matter and Marxism.

According to Kester, at the center of the controversy are pictures of the student used in flyers to promote the club. They included a picture of students in front of the U.S. Supreme Court building in Washington DC holding signs that said, “we are the pro-life generation’ and ‘Defund Planned Parenthood.”

After the student went to the school’s feminist club “Peonies” to take pictures of a presentation it was giving, she alleges school Dean Jeremey Luna accosted her to a point that she became frightened.
The suit alleges that Luna “stood in close proximity” of the student “even though he was told that the student was uncomfortable and the interaction was inappropriate.” Reached at the school on Tuesday for comment on the incident, Luna told The Epoch Times he was unfortunately unable to comment due to pending litigation.

Kester said the student took the pictures of the feminist club to show that the school had not objected to clubs with views on abortion and pictures used by them.

“NHS is teaching its students that the First Amendment does not apply to some government actors, granting them unbridled discretion to discriminate against student speech because of their viewpoint,” the lawsuit charges.

The conservative group Alliance Defending Freedom took on a similar case in 2019 in Florida when The Gulf Coast High School in Naples refused to recognize a student’s pro-life club.

The school deemed the club “too controversial.” However, the school eventually agreed to certify the club called Sharks 4 Life, which has been holding meetings at the school since last January.

The school agreed to recognize the club after the ADF sent a letter to the school charging it with violating the federal Equal Access Right, which prohibits public schools from receiving federal funds if they deny a student’s First Amendment right to conduct meetings for religious, political, philosophical, or other content of the speech at such meetings.”

In 2018, The Noblesville School District made national headline news for a school shooting at its middle school that left one student in critical condition and caused serious injury to a teacher who was hailed a hero for tackling the gunman and swatting the gun out of his hand.

The victim, Ella Whistler, who was 13 at the time of the shooting, was shot seven times. She has since recovered from her injuries as has seventh-grade science teacher and football coach Jason Seaman.

The shooting brought together the community, which held vigils for the shooting victims.

Lisa Duell, the mother of the student in the pro-life club lawsuit, spearheaded the national grassroots group for parents whose children attended a school where there was a shooting. Duell, whose group is called “Save Our Students,” was joined by parents of the Parkland school shooting in Florida to establish advanced security systems at schools.