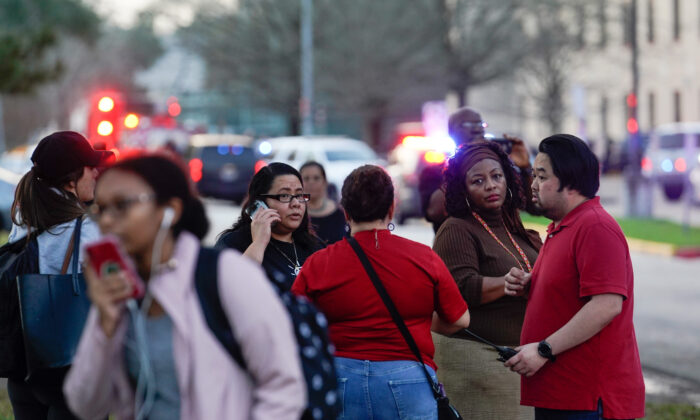 People wait outside Bellaire High School after a shooting on Jan. 14, 2020, in Bellaire, Texas. (Melissa Phillip/Houston Chronicle via AP)
Crime and Incidents

A student was shot to death on Jan. 14 at a high school in Texas and a suspect remained at large, local officials said.

Grenita Latham, interim superintendent of the Houston Independent School District, confirmed the shooting victim at Bellaire High School had died. She gave no other information except that classes will go on tomorrow and took no questions.

Emergency crews were seen performing CPR as the student was carried on a stretcher to an ambulance outside Bellaire High School, KPRC-TV reports. There were conflicting media reports about whether the shooting happened inside or outside the school.

The city, a suburb southwest of Houston, confirmed on Twitter that there was a shooting and said the suspect is still at large. It advised residents to avoid the area around the school or remain in their homes.

There has been a shooting at Bellaire High School. The suspect is still at large. Please avoid the area and/or remain in your home until you receive further information from the City of Bellaire.

Television footage from the school showed students gathered outside and police cars and an ambulance with their lights blazing.

Houston Independent School District police officials said that the shooting is under investigation and declined to comment further or say when more information would be released. School officials could not be immediately reached for comment.