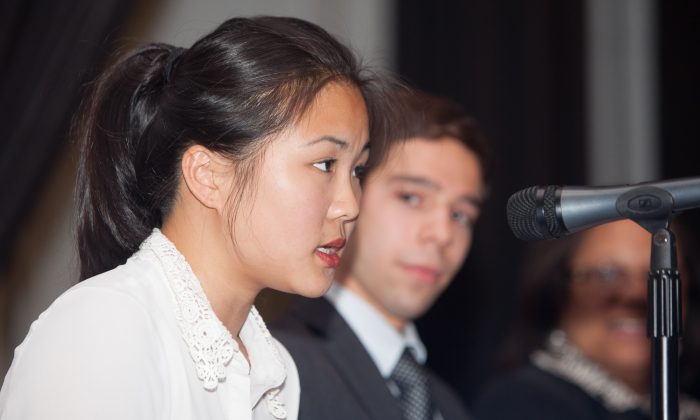 After their experience on the Panel for Educational Policy, two departing high schoolers suggest some rethinking is still needed
By Petr Svab

NEW YORK—It was the last meeting Tuesday for Ethan Marcus and Jessie Wang, members of the city’s Panel for Educational Policy, a 13-member body that approves all important decisions, from school closures to the budget. The students thanked other panel members for the experience, earning a round of applause. With their focused looks and professional demeanor, one could easily forget they’re high school seniors.

Deep inside the city’s public education system, there lies the Student Advisory Council, whose members speak for over one million children within our schools. Each borough sends student representatives to monthly meetings with the Education Department. Each year, two are selected to join the monthly Panel for Educational Policy (PEP) meetings. Even though the students serve as non-voting members, it gives them unique access, as they can directly address the schools chancellor, who leads the panel.

Hearing from student representatives from all over the city, Marcus and Wang possess a unique perspective. As their term started in September of last year, they also experienced the change from the Bloomberg administration to the de Blasio administration.

As the majority of PEP members are appointed by the mayor, the body was often seen as a rubber stamp under former Mayor Michael Bloomberg. Just once since its establishment in 2002 did the panel set out to vote against the mayor on a major issue. It was in 2004; three members were fired shortly before the meeting, and the policy went through. Over the years, the PEP meetings increasingly turned into displays of public dissatisfaction, with attendees at the public meetings shouting and even cursing at the members.

That was the case, too, when Marcus and Wang walked onto the stage for the first time in October 2013. The Prospect Heights Campus auditorium was packed with various groups chanting and holding banners. “It was a raging mob,” Wang remembered. “We were booed at. Even though we are student members and we had nothing to do with the policy that was happening, we were still hated.”

The situation grew so heavy that Wang got concerned for her safety. “I really thought someone would throw something onto the stage. I was actually at one point just waiting to see if someone would get hurt,” she said.

“I don’t blame them,” Marcus said, noting the PEP was about to approve 22 co-locations at that time, pushing new schools into school buildings the Education Department (DOE) deemed underutilized. The decisions were strongly opposed by parents and teachers of the affected schools.

Even though Wang knew about the promised changes, it couldn’t prevent the surprise she experienced at the March PEP meeting, the first one hosted by Fariña. Instead of hateful outbursts, the chancellor was welcomed with a round of applause. Even the public comments changed dramatically.

But the biggest shock came at the May meeting. The PEP members blocked one of the co-location proposals, a scenario that would have been impossible just a few months earlier. Fariña reacted by inviting the members to tour the affected school. Marcus called it “a very telling sign of how this administration is tolerant of dissenters.”

Despite the positive onset, however, the student reps expect much more of a change.

Hearing from other students, Wang and Marcus easily agreed on the most pressing issue. “Everyone has the same perspective of too much testing,” Wang said. “We need to be well-rounded. We can’t just focus on roboticizing our students and making them into test preppers.”

Fariña offered some hope when she said during the May meeting that “test prep will make you a robot.”

Yet, test prep is hard to resist when so much depends on the scores. In some high school grades, students go through 10 different major tests a year. Some of them are state-mandated and affect the students’ ability to graduate. The rest are either required or not required but capable of giving an edge when applying to colleges.

Wang said the tests don’t capture the actual capabilities of students. “There are 32 forms of intelligence,” she said. “A couple of my friends, they’re geniuses at music. Their academics? Maybe not so much. But that doesn’t mean they lack something. For them to be discriminated because now art is not as important as academics, as some people say, that’s definitely not fair.”

The Common Core Education Standards, adopted by the city’s high schools this year, are supposed to address some of the concerns the students raised. The standards were introduced in 2009 with a promise of better preparation for college. Supported by federal grants and donations from the Bill and Melinda Gates Foundation, the Common Core was quickly accepted by 45 states.

But students are not convinced, according to Marcus. “A lot are very critical, and I’ll admit I’m also one of those critical members of that team,” he said.

“My school, they introduced an English language standard—a ‘rubric’—and everything in English now has to be argumentative,” Marcus said. “There’s only structure for, ‘Can you argue this point?’ A, B, and C. Done.” But what about different points of view? What about interpreting fictional works? “Students need to be versed in all types and forms of literature and different ways of interpreting it,” Marcus said.

Wang said she’s skeptical, noting she has experienced several attempts at education reform during her school years, none of which made a difference for her. “What the students see is just paper and pen,” she said. “What they get in the classrooms is a test booklet, so they don’t really understand what is actually the difference.”

“I think there are some design flaws that need to be looked at and need to be strongly reconsidered,” Marcus said. “I don’t think necessarily we have to abolish the whole system, but I do think we need to take a step back [and] re-evaluate what we want out of our education system, what we want out of Common Core.”

Marcus will be off to Princeton this September, while Wang will attend the Colin Powell School of Civic and Global Leadership. They both wish to stay versed in public education policy. Marcus even eyes a future in public service. Fariña offered him some career advice: “From student representative to chancellor.”