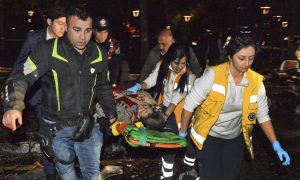 After a car bombing in Turkey’s capital killed at least 34 people and wounded around 125 others on March 13, local student Elnaz Hajikhani said her life was saved by a miracle.

The blast occurred on the city’s main boulevard, Ataturk Bulvari, close to Ankara’s main square, Kizilay. It happened adjacent to a bus stop near Guven Park, right in front of the Ministry of Education.

The private NTV news channel said a car, believed to be laden with explosives, detonated close to a bus, setting several vehicles on fire.

Suddenly I heard a massive explosion. All I could see was a big dark cloud.
— Elnaz Hajikhani, university student

Hajikhani was just exiting the subway and on her way to a bus stop—the exact bus stop where the explosion occurred.

“Suddenly I heard a massive explosion. All I could see was a big dark cloud and big red and orange fire balls,” said Hajikhani, who is from Iran and studies at Middle East Technical University in Turkey.

“The escalator I was on had collapsed but somehow I managed to get out. I heard people screaming but barely saw anyone injured or dead. It was impossible to see.”

Here’s a video of the blast where you can see Hajikhani being struck by the flames on the right, exiting the escalator, and then running away (SOME VIEWERS MAY FIND THIS VIDEO DISTURBING).


She remembers there were many people in Kizilay, even though there are usually fewer on Sunday. “I think it was because of [the] University exam which was held today,” she said in an interview conducted via a phone call and text messages.

Hajikhani was not seriously injured, but easily could have been if she wasn’t late to catch a bus that day. Hajikhani is a practitioner of the Falun Gong spiritual practice and believes her life was spared thanks to a miracle.

“I went to school today. I had a lot of delays somehow. If there was no delay I would be one of the people at the bus stop and would be dead by now,” she said.

“I never felt any fear or pain during the explosion. I walked away from the incident calmly,” she said. “When I got back home I realized that my knee was bleeding and swollen badly. I have never felt any pain though.”

The bombing is the third in the city in five months. It occurred just three weeks after a suicide car bombing in the capital targeted buses carrying military personnel, killing 29 people. A Kurdish militant group which is an offshoot of the outlawed Kurdish rebel group, the Kurdistan Workers’ Party, or PKK, claimed responsibility for the Feb. 17 attack. The government, however, said that attack was carried out by a Syrian Kurdish militia group in concert with the PKK, which has waged a 30-year insurgency.

Epoch Times reporter Emel Akan and the Associated Press contributed to this report.