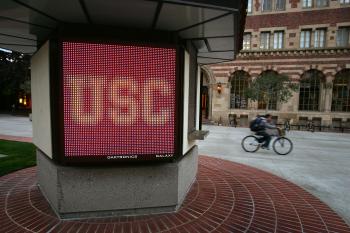 Student Loans: More college-age students are defaulting on their student loans, according to a recent report from the US Department of Education this week. (David McNew/Getty Images)
US

Mimi Li
View profile
Follow
biggersmaller
Print
Student loans are the source of many college-age students' struggles, and a new report found that more students are defaulting on their loans, according to a report from the United States Department of Education this week.

Students who had the most difficult time in repaying their loans were those who attended for-profit colleges, the report found.

A “snapshot” of default rate data for student loans in fiscal year 2008, the most recent data available, showed that the national cohort default rate was up to 7.0 percent, compared to 6.7 percent in 2007.

"This data confirms what we already know: that many students are struggling to pay back their student loans during very difficult economic times." US Secretary of Education Arne Duncan said in a press statement.

Students at for-profit schools made up 43 percent of all student loan defaulters but make up 26 percent of the borrower population.

“Far too many for-profit schools are saddling students with debt they cannot afford in exchange for degrees and certificates they cannot use. This is a disservice to students and taxpayers, and undermines the valuable work being done by the for-profit education industry as a whole," Duncan said.